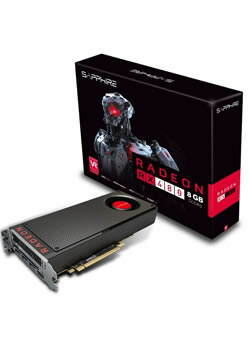 What FPS performance can the Radeon RX 480 Sapphire 8GB get on latest AAA 2022 games? In particular our game review looks at the FPS achieved running on Ultra graphics settings on the 1080p screen resolution as well as 1440p and 4K. This graphics hardware can run 450 of the 1000 most demanding PC games played today.

With 1080p being the most common gaming resolution at the moment we explored how well the Radeon RX 480 Sapphire 8GB can run Star Citizen at 1080p and predict it will return reasonable frame rates at the following graphics settings - Low: 145 FPS, Medium: 114 FPS, High: 77 FPS and Ultra: 55 FPS. For performance contrast we can see that FIFA 22 returns a strong 96 FPS at Ultra 1080p.

As the PC gaming masses explore larger screen resolutions we decided to run some game checks at 1440p across a few popular games. We predict the Radeon RX 480 Sapphire 8GB will run the upcoming game Star Citizen to a playable performance level. Predictions across the graphics settings looked like this, Low: 111 FPS, Medium: 87 FPS, High: 59 FPS and Ultra: 42 FPS. Another game tested was FIFA 22, L: 192FPS, M: 152FPS, H: 102FPS, U: 73FPS. And then we checked graphics card performance on Battlefield 2042, which returned L: 29FPS, M: 23FPS, H: 15FPS, U: 11FPS at 1440p. After a look at the popular games running at 1440p with the Radeon RX 480 Sapphire 8GB, this is a good choice of hardware for increased screen resolution gaming. We can see this graphics card is capable of delivering reliable frame rates at Ultra and certainly High graphics settings at 1440p.

Overview
The reference Radeon RX 480 8GB by Sapphire is a Performance Graphics Card based on the Third Revision of the Graphics Core Next (GCN) Architecture.