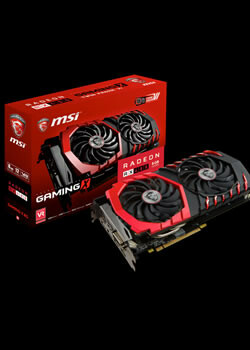 This graphics card offers upper mid level gaming performance. The Radeon RX 480 MSI Gaming X 8GB GPU could struggle if it was to try and run the most demanding games available today, but it meets a lot of game system requirements found in today’s games.

What FPS performance can the Radeon RX 480 MSI Gaming X 8GB get on latest AAA 2022 games? In particular our game review looks at the FPS achieved running on Ultra graphics settings on the 1080p screen resolution as well as 1440p and 4K. Of the 1000 most demanding recommended specs found in game requirements today, this gpu is more powerful than the graphics requirement of 602 games in todays list.

First we looked at 1080p resolution for the Radeon RX 480 MSI Gaming X 8GB performance to explore what sort of benchmarks it would achieve on the popular title Star Citizen and predict it will deliver reasonable frames per second across the following graphics settings - Low: 148 FPS, Medium: 116 FPS, High: 78 FPS and Ultra: 56 FPS. We proceeded to look at Resident Evil 8 to see how that compared and saw that it returned a weak 24 FPS at Ultra 1080p.

People are turning their increasingly more powerful graphics cards to the popular 1440p screen size so we tested the Radeon RX 480 MSI Gaming X 8GB to see how it performs on 1440p. First off we have researched Star Citizen and predict it will be playable. The frame rates predicted for the game presets were - Low: 113 FPS, Medium: 89 FPS, High: 60 FPS and Ultra: 43 FPS. We added Resident Evil 8 to our tests and saw it was weak with a 18 FPS at Ultra 1440p. And then tested FIFA 22 which got 74 FPS at Ultra 1440p. 1440p Radeon RX 480 MSI Gaming X 8GB PC gaming is a good choice for running modern games at Ultra in this larger screen resolution.

Overview
Radeon RX 480 Gaming X 8GB by MSI is a Performance Graphics Card based on the Third Revision of the Graphics Core Next (GCN) Architecture. The bigger brother of the gaming card, this card has an even more boosted clock, an added DVI and HDMI slot, a non-stock cooler and, hard to escape in this generation, RGB lights.

System Suggestions
The Radeon RX 480 Gaming X 8GB by MSI is best suited for resolutions up to and including 2560x1440. We recommend a High-End Processor and 8GB of RAM for Optimal Performance.