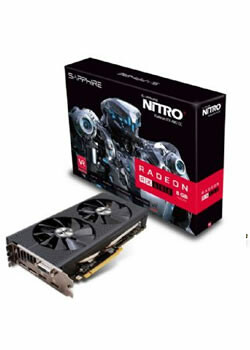 While some games have more powerful requirements than this GPU, the Radeon RX 480 Sapphire Nitro+ 8GB is only really challenged by the most demanding games released today, but normally it is more than capable of running games with a stable frame rate at 1080p.

Here is a performance review on how capable the Radeon RX 480 Sapphire Nitro+ 8GB is at running the more popular games of 2021. Specifically looking at this PC hardware’s ability to get suitable frames per second to play on Ultra game settings and what FPS it might get on 1080p, 1440p and 4K screen res. We look at 1000 of the most demanding games available today and this GPU is better than the recommended graphics requirement of more than 742 games in the list.

A Radeon RX 480 Sapphire Nitro+ 8GB card at 1080p is seeing a strong frame rate when running FIFA 22 on Ultra - 102 FPS. Lets look at the predicted performance it will get on Dying Light 2 which is 34 FPS. To add a bit more variety lets see how the popular Back 4 Blood performs on this hardware, which gets a reasonable 47 FPS.

As the PC gaming masses explore larger screen resolutions we decided to run some game checks at 1440p across a few popular games. We discovered the Radeon RX 480 Sapphire Nitro+ 8GB ran FIFA 22 to a good performance level. Results across the graphics settings looked like this, Low: 204 FPS, Medium: 161 FPS, High: 108 FPS and Ultra: 77 FPS. Another game researched was Dying Light 2 with predictions of L: 67FPS, M: 53FPS, H: 36FPS, U: 26FPS. And then we checked graphics card performance on Back 4 Blood, which returned L: 95FPS, M: 75FPS, H: 50FPS, U: 36FPS at 1440p. Running games at 1440p with a Radeon RX 480 Sapphire Nitro+ 8GB is a good choice for running modern games at Ultra in this larger screen resolution.

Overview
The Radeon RX 480 Nitro+ 8GB by Sapphire is a Performance Graphics Card based on the Third Revision of the Graphics Core Next (GCN) Architecture. It is one of the best RX 480s available when core speed is concerned, yet weirdly has a lower max screen resoloution than it's competitors. It swaps a Display port for an extra HDMI and DVI slot, has their new Free Flow cooling technology and ofcourse, RGB lights on the card.

System Suggestions
As the Radeon RX 480 8GB is best suited for resolutions up to and including 2560x1440 we recommend a High-End Processor and 8GB of RAM for Optimal Performance.