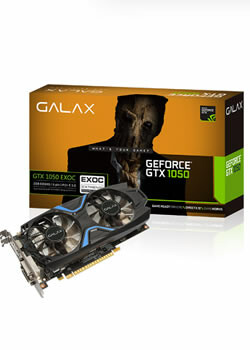 Based on current gaming requirements the GeForce GTX 1050 Galax EXOC 2GB is considered one of the weakest cards and wont meet modern AAA game specs.

Game performance for the GeForce GTX 1050 Galax EXOC 2GB where we look at the bigger games played in 2022. Looking closely at the graphics card frame rate performance on Ultra graphics settings at 1080p, 1440p and 4K screen resolutions. When considering how well this graphics card can run the 1000 most demanding games available today it can best 172 of the games’ recommended graphics requirements.

The 1080p FPS on Ultra for the GeForce GTX 1050 Galax EXOC 2GB shows us that Resident Evil 8 is getting a weak result of 0 FPS, and then we are seeing Star Citizen predicted to return a playable 27 FPS while another game on our list is the Dying Light 2 which is getting 0 frames per second at Ultra 1080p.

People are turning their increasingly more powerful graphics cards to the popular 1440p screen size so we tested the GeForce GTX 1050 Galax EXOC 2GB to see how it performs on 1440p. First off we have researched Star Citizen and predict it will be weak. The frame rates predicted for the game presets were - Low: 53 FPS, Medium: 42 FPS, High: 28 FPS and Ultra: 20 FPS. We added Dying Light 2 to our tests and saw it was weak with a 0 FPS at Ultra 1440p. And then tested Resident Evil 8 which got 0 FPS at Ultra 1440p. Looking at a few of these 1440p results for the GeForce GTX 1050 Galax EXOC 2GB we get the impression that it is unable to perform adequately across modern games at this increased resolution.

Overview
Galax's 2GB GeForce GTX 1050 EXOC is their moth overclocked version of Nvidia's lower end graphics card, designed to compete against AMDs more affordable gaming cards, like the RX 460 or RX 470 and expected to replace the outgoing GTX 960. This card features a non stock dual fan cooler and as mentioned before an overclocked core speed out the box.

Power Consumption
With a rated board TDP of 75W, this card require a 6-pin connector to accommodate it's cooling system and overclocked core.

Performance
The GTX 1050 EXOC by Galax will enable mid level graphics performance on modern AAA 2016 released games. Although there will be variations on this frame rate we expect this card to deliver around 55+ FPS on medium graphics settings at a 1080p screen resolution.
Comparatively, this card will have slightly faster performance than the GTX 960.

System Suggestions
The GeForce GTX 1050 EXOC is best suited for resolutions up to and including 1920x1080, so our reccomendation would be to use 1600x900 in order to get the most out of your settings. We recommend a high-end processor such as the i5-6500 and 8GB of RAM for optimal performance.