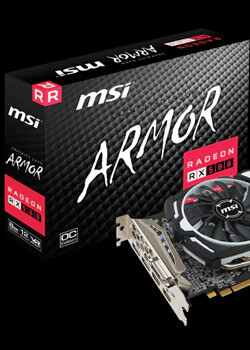 While some games have more powerful requirements than this GPU, the Radeon RX 580 MSI Armor OC 8GB is only really challenged by the most demanding games released today, but normally it is more than capable of running games with a stable frame rate at 1080p.

Here is a performance review on how capable the Radeon RX 580 MSI Armor OC 8GB is at running the more popular games of 2021. Specifically looking at this PC hardware’s ability to get suitable frames per second to play on Ultra game settings and what FPS it might get on 1080p, 1440p and 4K screen res. The Radeon RX 580 MSI Armor OC 8GB can run the recommended graphics system requirements for 748 games today, of the top 1000 most demanding.

Looking at some of the modern popular games people are playing today the Radeon RX 580 MSI Armor OC 8GB is predicted to run Battlefield 2042 with playable performances on 1080p Ultra, getting 34 frames per second. Comparing this to Days Gone which is getting reasonable results, where it averages 55 FPS. Another popular game we looked at is Back 4 Blood, which is predicted to run at 48 frames per second.

One of the growing popular screen resolutions for PC gaming is the wider 1440p. So we wanted to see how well the Radeon RX 580 MSI Armor OC 8GB performed at 1440p by taking a look at some of the current popular games. First we looked at Battlefield 2042 and predict it will deliver playable frames per second across the following graphics settings - Low: 68 FPS, Medium: 54 FPS, High: 36 FPS and Ultra: 26 FPS. We then checked the performance on Days Gone to see if that runs well. It was playable with a 42 FPS at Ultra 1440p. Getting popular modern games to run at 1440p on the Radeon RX 580 MSI Armor OC 8GB is a reasonable choice for most modern games at 1440p, but you may encounter some need to adjust graphics settings down from Ultra to High in some cases to improve gaming stability.

System Suggestions
The new MSI RX 580 Armor OC 8GB released on the 18th April 2017 and is best suited for resolutions up to and including 2560x1440. We recommend a high-end processor, like the new Ryzen R5 and at least 8GB of RAM for optimal gaming performance.