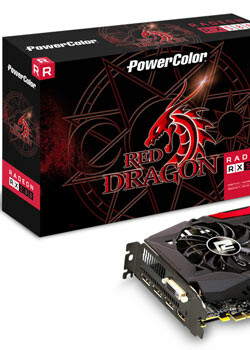 While some games have more powerful requirements than this GPU, the Radeon RX 580 PowerColor Red Dragon 8GB is only really challenged by the most demanding games released today, but normally it is more than capable of running games with a stable frame rate at 1080p.

Here we take a closer look at the various performances across 1080p, 1440p and 4K screen resolutions for the Radeon RX 580 PowerColor Red Dragon 8GB. In particular this is looking at the Ultra graphics settings to see what sort of FPS this graphics card can get across some of the more popular games played in 2021. This graphics hardware can run 747 of the 1000 most demanding PC games played today.

A Radeon RX 580 PowerColor Red Dragon 8GB card at 1080p is predicted to see a playable frame rate when running Far Cry 6 on Ultra - 29 FPS. Lets look at the predicted performance it will get on Back 4 Blood which is 47 FPS. To add a bit more variety lets see how the popular Resident Evil 8 performs on this hardware, which gets a playable 27 FPS.

With PC gamers looking for larger screen sizes like 1440p we tested the Radeon RX 580 PowerColor Red Dragon 8GB by researching Far Cry 6 leading us to predict a weak performance. Its FPS predictions for the graphics settings are as follows - L: 58FPS, M: 46FPS, H: 31FPS, U: 22FPS. Another popular game we researched with this card was Back 4 Blood and that was playable. This graphics card is predicted to deliver 36 FPS at Ultra 1440p. Another popular title was Resident Evil 8 which gets weak results with a 21FPS on Ultra 1440p. In summary we feel the Radeon RX 580 PowerColor Red Dragon 8GB running at 1440p is a perfectly suitable selection of hardware for theis larger screen size. If a game at 1440p struggles a bit or experiences a frame drop then you can tweak settings in game to help get it stable. This might mean lowering it to medium or low in some specific options.

GPU
The Radeon RX 580 PowerColor Red Dragon 8GB central processing unit runs at 1257MHz and goes up to a top 1350MHz when in boost and turbo mode with the reference RX 580 card's boost is 1340MHz.

System Suggestions
The new PowerColor RX 580 Red Dragon 8GB released on the 18th April 2017 and is best suited for resolutions up to and including 2560x1440. We recommend a high-end processor, like the new Ryzen R5 and at least 8GB of RAM for optimal gaming performance.