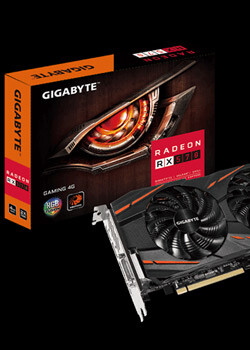 We take a look at game performance achieved on this graphics card when running 2021 popular games. This short Radeon RX 570 Gigabyte Gaming 4GB game hardware review looks at the graphics card frame rate performance on Ultra graphics settings at 1080p, 1440p and 4K screen resolutions. We look at 1000 of the most demanding games available today and this GPU is better than the recommended graphics requirement of more than 386 games in the list.

The Radeon RX 570 Gigabyte Gaming 4GB graphics card is returning a reasonable performance on Days Gone at 1080p of 47 frames per second at Ultra graphics settings. Another popular title that is good to benchmark graphics cards against is Grand Theft Auto VI which we predict will get weak frame rates of 16 FPS. A third game we can look at on Ultra at 1080p is the popular Star Citizen, which is predicted to get 51 FPS under tests.

Moving screen sizes up to 1440p we ran Days Gone on the Radeon RX 570 Gigabyte Gaming 4GB to see that it got a playable set of frame rates. Here are the low to ultra results at 1440p - L: 94FPS, M: 74FPS, H: 50FPS, U: 35FPS. Another popular game to investigate at 1440p with this card was Grand Theft Auto VI which we predicted will be weak in performance netting an Ultra FPS of 12 FPS. Finally we then took a look at Star Citizen where its predicted Ultra 1440p Frame rates were playable at 39 FPS. 1440p Radeon RX 570 Gigabyte Gaming 4GB PC gaming is a reasonable performance fit for this resolution. Some of the more resource intensive games may well need a few graphical tweak to get the most out of the graphics card at this increased resolution.

The AMD Gigabyte Gaming RX 570 4GB graphics card released in April 2017 as an AMD performance gaming graphics card. This card competes against Nvidia's GTX 1050 Ti and replaces the older Radeon RX 470. As a Polaris refresh, the RX 570 runs at a slightly faster clock speed than the RX 470.

GPU
The Gigabyte Gaming RX 570 processing central unit runs at 1168MHz and goes up to 1255MHz, when the boost mode is triggered. The reference RX 570 card's boost clock is 1244MHz

Memory
The Gigabyte Gaming RX 570 comes with a 4GB frame buffer of GDDR5, through a 256-bit memory interface, while the memory clock operates at 1750MHz.

Power Consumption
The Gigabyte Gaming RX 570 has a rated board TDP of 120W, it requires at least a 400W PSU with one available 8-pin connector.

Performance
The AMD RX 570 Gigabyte Gaming delivers a Mid/High graphical performance for 2017. with the RX570 capable of running most triple AAA titles released during 2017 on medium to high graphics settings at a 1080p screen resolution. With some adjustments and lowering anti aliasing this RX570 4GB card can confidently maintain 60+ frames per seconds on high graphic settings at 1080p. Moving to 1440p screen resolution and the graphics card may need to be adjusted down to medium in order to maintain 50-60+ fps.