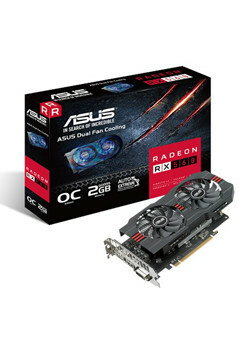 Here we take a closer look at the various performances across 1080p, 1440p and 4K screen resolutions for the Radeon RX 560 Asus Dual Fan 2GB. In particular this is looking at the Ultra graphics settings to see what sort of FPS this graphics card can get across some of the more popular games played in 2022. This graphics hardware can run 238 of the 1000 most demanding PC games played today.

The Radeon RX 560 Asus Dual Fan 2GB graphics card is returning a weak performance on Far Cry 6 at 1080p of 0 frames per second at Ultra graphics settings. Another popular title that is good to benchmark graphics cards against is Dying Light 2 which we predict will get weak frame rates of 0 FPS. A third game we can look at on Ultra at 1080p is the popular Forza Horizon 5, which was getting 19 FPS under tests.

Overview
\\r\\Radeon RX 560 Asus Dual Fan 2GB is a Middle-Class Graphics Card based on the 4th Generation of the Graphics Core Next (GCN) Architecture.

\\r\\nPower Consumption
\\r\\nWith a rated board TDP of 75W, it requires at least a 450W PSU and relies entirely on the PCI Slot for Power, meaning no Extra Connectors are required.

\\r\\nPerformance
\\r\\nThis graphics card was designed and marketed towards the competitive MOBO gamers. A light weight, small form factor GPU solution that offers mobility, so that gamers travelling to events can bring a smaller cheaper gaming rig. The Radeon RX 560 Asus Dual Fan 2GB can play most modern games at medium graphics selection on a 1080p screen res and expect around 45+FPS. It may struggle with the latest high-end AAA titles due to the limited available VRAm.

\\r\\nSystem Suggestions
\\r\\Radeon RX 560 Asus Dual Fan 2GB is best suited for resolutions up to and including 1920x1080. We recommend a Performance Processor and 8GB of RAM for Optimal Performance.