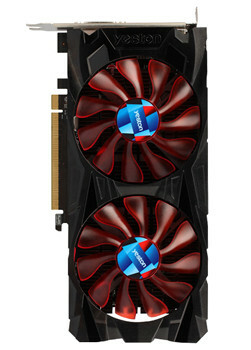 The Radeon RX 560 Yeston Gaea 4GB is a very low performing piece of gaming hardware and can probably only run indie system requirements.

What FPS performance can the Radeon RX 560 Yeston Gaea 4GB get on latest AAA 2021 games? In particular our game review looks at the FPS achieved running on Ultra graphics settings on the 1080p screen resolution as well as 1440p and 4K. 256 games can be played by this graphics card of the 1000 most demanding games being played by PC gamers today.

A Radeon RX 560 Yeston Gaea 4GB card at 1080p is seeing a weak frame rate when running Resident Evil 8 on Ultra - 0 FPS. Lets look at the predicted performance it will get on Dying Light 2 which is 1 FPS. To add a bit more variety lets see how the popular Back 4 Blood performs on this hardware, which gets a weak 22 FPS.

Overview
Radeon RX 560 Yeston Gaea 4GB is a Middle-Class Graphics Card based on the 4th Generation of the Graphics Core Next (GCN) Architecture.

Memory
The GPU accesses a 4GB frame buffer of Fast GDDR5, through a 128-bit memory interface, while the Memory Clock Operates at 1750MHz, 7GHz effective.

Performance
This graphics card was designed and marketed towards the competitive MOBO gamers. A light weight, small form factor GPU solution that offers mobility, so that gamers travelling to events can bring a smaller cheaper gaming rig. The Radeon RX 560 Yeston Gaea 4GB can play most modern games at medium graphics selection on a 1080p screen res and expect around 45+FPS

System Suggestions
Radeon RX 560 Yeston Gaea 4GB is best suited for resolutions up to and including 1920x1080. We recommend a Performance Processor and 8GB of RAM for Optimal Performance.