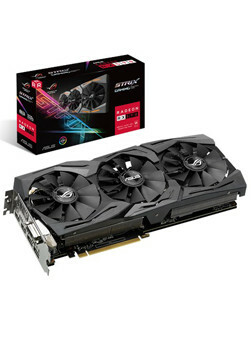 While some games have more powerful requirements than this GPU, the Radeon RX 590 Asus ROG Strix Gaming 8GB is only really challenged by the most demanding games released today, but normally it is more than capable of running games with a stable frame rate at 1080p.

Running at 1080p this card gets a weak frame rate from Battlefield 2042 with 24 FPS on Ultra. Then we take a look at Grand Theft Auto VI which is predicted to return a playable 31 FPS. Another title that we looked at is the popular Dying Light 2 which we predict will get a playable 38 FPS.

Overview
The new AMD Radeon RX 590 is an uprated version of the RX 580 on the smaller 12nm process node. The Radeon RX 590 Asus ROG Strix Gaming 8GB is a mid-range Radeon RX 500 Series graphics card and considered great price to performance for gaming at 1080p.

GPU
The RX 590 8GB central processing unit runs at 1469 MHz base clock and goes up to 1560 MHz when in boost and turbo mode, providing a small 1% overclock versus the reference model.

Power Consumption
The Radeon RX 590 Asus ROG Strix Gaming 8GB has a power TDP requirement of 175W. This means it will require at least a 500W PSU with one dedicated 8-pin connector.

System Suggestions
The new Radeon RX 590 Asus ROG Strix Gaming 8GB is best suited for resolutions up to and including 2560x1440, although is ideally suited for 1080p gaming. We recommend a high-end processor, like the new Ryzen R5 and at least 12GB of RAM for optimal gaming performance.