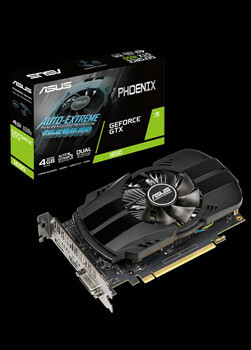 This PC hardware performance game review for the GeForce GTX 1650 Asus Phoenix 4GB graphics card, when running 2021 more popular games, lets us see what type of FPS this card gets when playing at 1080p, 1440p and 4K screen resolutions and ultra settings. This graphics hardware can run 309 of the 1000 most demanding PC games played today.

Looking at some of the modern popular games people are playing today the GeForce GTX 1650 Asus Phoenix 4GB is predicted to run Battlefield 2042 with weak performances on 1080p Ultra, getting 0 frames per second. Comparing this to Days Gone which is getting playable results, where it averages 38 FPS. Another popular game we looked at is Resident Evil 8, which is running at 19 frames per second.

Overview
The GeForce GTX 1650 is an Nvidia GeForce low-end graphics card which launched in April 2019. The GeForce GTX 1650 Asus Phoenix 4GB is designed to compete against AMD's more affordable gaming cards such as the RX 550 and the RX 560, and replaces the outgoing GTX 1050.
This is a dual-slot graphics card which connects to the rest of the system using a PCIe 3.0 x16 interface. The GeForce GTX 1650 Asus Phoenix 4GB features a single-fan cooling solution, IP5X dust resistance, Auto-Extreme technology, and GPU Tweak II compatability. Its small size makes it a good choice for a small form factor (SFF) PC build. This graphics card has below average overclocking potential.
Architecture
The Turing Architecture aims for 30-50% as much performance as the previous-gen Pascal Architecture.

Power Consumption
With a rated board TDP of 75W, it relies entirely on the PCI Slot for power, meaning no extra connectors are required. It is recommended you have a 300W or greater Power Supply Unit (PSU).

Performance
The GeForce GTX 1650 Asus Phoenix 4GB will enable low to mid-level graphics performance on modern AAA 2019 released games. Although there will be variations on this frame rate we expect this card to deliver around 50+ FPS on medium graphics settings at a 1080p screen resolution.
Comparatively, this card has slightly faster performance than the GTX 1050 Ti.

System Suggestions
The GeForce GTX 1650 Asus Phoenix 4GB is best suited for resolutions up to and including 1920x1080, so our recommendation would be to use 19200x1080 in order to get the most out of your settings. We recommend a high-end processor such as the i5-8400 and 8GB of RAM for optimal performance.