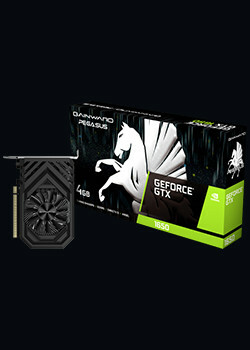 Here is a quick game performance synopsis for the AAA games played in 2022. In particular we focus on how well the GeForce GTX 1650 Gainward Pegasus 4GB runs at Ultra graphics settings and what frames per second it is getting at 1080p, 1440p and 4K monitor resolutions. This card runs recommended graphics requirements of 300 games from the top 1000 most demanding games being played today.

The GeForce GTX 1650 Gainward Pegasus 4GB graphics card is returning a weak performance on Dying Light 2 at 1080p of 12 frames per second at Ultra graphics settings. Another popular title that is good to benchmark graphics cards against is Grand Theft Auto VI which we predict will get weak frame rates of 12 FPS. A third game we can look at on Ultra at 1080p is the popular Back 4 Blood, which was getting 45 FPS under tests.

Performance
The GeForce GTX 1650 Gainward Pegasus 4GB will enable low to mid-level graphics performance on modern AAA 2019 released games. Although there will be variations on this frame rate we expect this card to deliver around 50+ FPS on medium graphics settings at a 1080p screen resolution.
Comparatively, this card has slightly faster performance than the GTX 1050 Ti.

System Suggestions
The GeForce GTX 1650 Gainward Pegasus 4GB is best suited for resolutions up to and including 1920x1080, so our recommendation would be to use 19200x1080 in order to get the most out of your settings. We recommend a high-end processor such as the i5-8400 and 8GB of RAM for optimal performance.