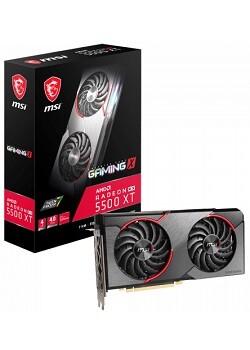 While some games have more powerful requirements than this GPU, the Radeon RX 5500 XT MSI Gaming X 4GB is only really challenged by the most demanding games released today, but normally it is more than capable of running games with a stable frame rate at 1080p.

This PC hardware performance game review for the Radeon RX 5500 XT MSI Gaming X 4GB graphics card, when running 2022 more popular games, lets us see what type of FPS this card gets when playing at 1080p, 1440p and 4K screen resolutions and ultra settings. In terms of performance against the most demanding games today this graphics card can play 736 of the 1000 most demanding PC games beating their recommended requirements.

Looking at some of the modern popular games people are playing today the Radeon RX 5500 XT MSI Gaming X 4GB is predicted to run Star Citizen with reasonable performances on 1080p Ultra, getting 59 frames per second. Comparing this to Battlefield 2042 which is getting weak results, where it averages 20 FPS. Another popular game we looked at is Far Cry 6, which is running at 30 frames per second.

Moving screen sizes up to 1440p we researched Star Citizen on the Radeon RX 5500 XT MSI Gaming X 4GB and predict it will get a reasonable set of frame rates. Here are the low to ultra predictions at 1440p - L: 118FPS, M: 93FPS, H: 62FPS, U: 45FPS. Another popular game to test at 1440p with this card was Battlefield 2042 which seemed weak in performance netting an Ultra FPS of 15 FPS. Finally we then took a look at Far Cry 6 where its Ultra 1440p Frame rates were weak at 23 FPS. Running games at 1440p with a Radeon RX 5500 XT MSI Gaming X 4GB is a perfectly suitable selection of hardware for theis larger screen size. If a game at 1440p struggles a bit or experiences a frame drop then you can tweak settings in game to help get it stable. This might mean lowering it to medium or low in some specific options.

Architecture
It is powered by the 7nm Navi GPU, which has 1408 shader processing units, 88 TMUs and 32 ROPs.

GPU
The central unit runs at 1717 MHz and goes up to 1845 MHz when the boost mode is triggered.

Memory
The RX 5500 XT 4GB comes with a 4GB frame buffer of GDDR6 through a 128-bit memory interface, while the memory clock operates at 1750MHz, or 14GHz effective.

Performance
The Radeon RX 5500 XT MSI Gaming X 4GB been built as a Low/Mid performance graphics card for 2020. Its direct competitor is the Nvidia GeForce GTX 1650 Super. It will run most triple AAA titles released during 2020 on medium to high graphics at 1080p screen resolution. With adjustments and lowering anti aliasing this RX 5500 XT 8GB card can confidently maintain 60+ frames per seconds on high graphic settings at 1080p. Moving to 1440p screen resolution and the graphics card may need to be adjusted down to medium in order to maintain 50-60+ fps.

System Suggestions
The Radeon RX 5500 XT MSI Gaming X 4GB is best suited for resolutions up to and including 1920x1080. We recommend a mid range R5 Ryzen processor and at least 12GB of system memory for optimal gaming performance from the RX 5500 XT 4GB.