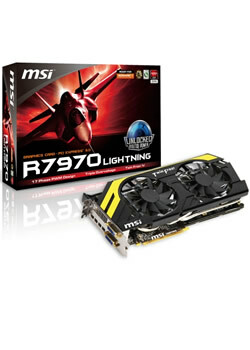 The Radeon HD 7970 Lightning Edition is a very low performing piece of gaming hardware and can probably only run indie system requirements.

Now onto the frame rates achieved at 1080p. We are seeing Days Gone getting 28 FPS with the Radeon HD 7970 Lightning Edition, Grand Theft Auto VI predicted to get 0 FPS and FIFA 22 getting 66 frames per second. All run on Ultra at 1920x1080 screen res.

With PC gamers looking for larger screen sizes like 1440p we tested the Radeon HD 7970 Lightning Edition by playing Days Gone which yielded a weak performance. Its FPS results for the graphics settings are as follows - L: 56FPS, M: 44FPS, H: 30FPS, U: 21FPS. Another popular game we researched with this card was Grand Theft Auto VI and that was weak. This graphics card is predicted to deliver 0 FPS at Ultra 1440p. Another popular title was FIFA 22 which gets reasonable results with a 50FPS on Ultra 1440p. Looking at a few of these 1440p results for the Radeon HD 7970 Lightning Edition we get the impression that it is not a first choice gaming resolution. While this graphics card would likely be more suited to 1080p gaming, you may be able to make some graphical tweaks in the game options to improve your stability at 1440p.

Radeon HD 7970 Lightning Edition is a special edition of the Radeon HD 7970 release by AMD. See its page for more information.
Changes include a boost in the core-clock from 925MHz to 1070MHz and in the memory clock from 5500GHz to 5600GHz. A tweaked cooling system and other changes were also made.
Benchmarks indicate a 8% performance boost when compared to the standard Radeon HD 7970.
Therefore, all games, including very demanding ones, should be fully playable at max settings and with very attractive resolutions.