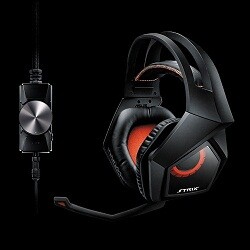 Release Period - Unknown Release Date
Asus Strix Pro Review
The STRIX Pro is a very eye catching headset. The main body is finished in matt black, giving it a subdued appearance – despite the bright orange secondary colour. The plastic used has a very slight texture, making it quite grippy, but not rough.
As much as the plastic is a nice touch and contrasts well with the orange, there is a hell of a lot of it. The headset almost seems too big on the earphones and this is only amplified when you’re actually wearing it.
The earcups are able to tilt towards and away from the head while rotating fully around so that the “eyes” on the side of the earcups face away from you. There is a little flex in the other direction which bodes well for the life of the headset, especially if you are rough with handling. Unfortunately this flex means that the STRIX PRO can make some creaking sounds when moved around.

The earphone padding is leather, and like all leather ear pads, they can get warm. Must admit, I do like the bright orange though.
The earcups do fold completely flat, which makes for much easier packing if you want to take this set somewhere with you. However, the sheer size of the earcups means you can’t do the same thing to wear them on your chest/shoulders when they’re not being used. They are just too big.


The headband is a nice mix of black leather and orange stitching, which gives it a real quality look and feel. The fact that the headband and plastic frame are separate is testament to its ability to take some damage – as it keeps everything as flexible as possible.

Taking the executive decision to choose the side the mic goes, Asus has placed it on the left hand side – though it is detachable. You won’t plug anything else in either, as it’s a very unique connector. It is 3.5mm secretly, but there’s a big plastic housing for some reason.

All the connectors are gold leafed, so should be a little more durable than the average connector.
Quoted from:
Home site