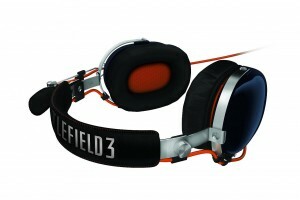 With the Battlefield 3™ Razer BlackShark 2.0 Gaming Headset for the PC, gamers will experience the full force aural intensity of EA and DICE’s military shooter masterpiece Battlefield 3. Hear the loud clatter of a machine gun, the deep tremor from a tank’s canon blast, or the ground-shaking explosions, as if you were right there in the thick of the action, with the headset’s crisp clear and bass-enhanced stereo audio.

Feel like a real attack helicopter pilot with the headset’s exclusive Battlefield 3 military aviator design. It features a sound-isolating circumaural ear cup design inspired by those found on headsets worn by real pilots, blocking out distracting ambient noises to keep the tactical chatter over radio and immersive sounds of war in. And when you stop gaming to get out and about, detach the boom microphone to take the stylish headphones with you for an awesome audio solution on-the-go.

The Razer BlackShark Gaming Headset is the most vital weapon for your fight in the intense military shooter Battlefield 3.
Quoted from:
Home site

These are awesome!!! I just bought them and they are exactly what they advertise!