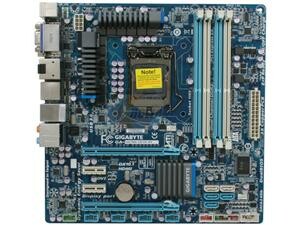 Maximum Power Delivery
Like the pistons and cylinders of a car engine, the design of the motherboard Voltage Regulator Module (VRM), component quality and number of power phases greatly affects motherboard performance. GIGABYTE engineers were first to realize not only the importance of using the best quality components for this critical area, but also that with more power phases, there can be more power available to your CPU. GIGABYTE 6 series motherboards with their new redesigned VRM, promise to deliver first class system performance and power stability. With only the best quality components and unique design, incorporating Dual CPU Power and Power Phase Boost with Multi-gear Switching, your CPU can enjoy better power than what was available from previous motherboards.

GIGABYTE 6 series motherboards incorporate an Intel® approved Intersil PWM controller that is VRD 12 (Voltage Regulator Down) compliant. This means that it offers new features that include SerialVID (SVID) which transfers power management information between the processor and voltage regulator controller, allowing more robust and efficient signaling control between the CPU and PWM controller – hence, delivering a more energy efficient platform.


A traditional Voltage Regulator Module (VRM) consists of a Choke, Capacitors, MOSFETs and a Driver IC. By incorporating the MOSFETs and driver IC in accordance with the Intel® Driver-MOSFET specification, we can achieve higher power transfer and increased efficiency at higher switching frequencies to satisfy the growing power requirements of today's processors. Driver-MOSFETs also help to reduce VRM real estate requirements in the CPU zone.


108dB Signal-to-Noise ratio playback
GIGABYTE strongly believes that in 2011, HD audio playback is a standard specification, and as such, we have made Blu-ray audio playback a standard for all of our motherboards.
All of GIGABYTE's 2011 motherboards feature higher capability audio solution with 108dB Signal-to-Noise ratio (SNR) playback quality to deliver high-performance, multi-channel HD audio. SNR is a comparison of the amount of signal to the amount of noise such as hiss present in the signal (expressed in Decibels). A higher SNR equals a better audio experience. For example, 108dB, is a high audio specification, as this means the audio signal is 108dB higher than the level of the noise.


The GIGABYTE Ultra Durable™ 3 design features twice the copper for both the power and ground layers of the PCB, dramatically lowering system temperature by efficiently spreading heat from critical areas of the motherboard (such as the CPU power zone) throughout the entire PCB. GIGABYTE's Ultra Durable™ 3 also lowers the PCB impedance by 50%, which helps to reduce electrical waste and further lowers component temperatures. A 2x Copper layer design also provides improved signal quality and lower EMI (Electromagnetic Interference), providing better system stability and allowing for greater margins for overclocking...more

On/Off Charge Technology
GIGABYTE On/Off Charge technology allows you to charge your iPhone, iPad and iPod Touch regardless of whether your PC is on, in standby mode or even off. A derivative of GIGABYTE's highly acclaimed 3x USB Power feature, On/Off Charge enables devices to draw more current from GIGABYTE motherboard USB ports than standard USB ports allow, so that charging from your PC can be as fast as with a charger...more
*Due to certain mobile phone limitations, users may need to connect the mobile phone to their PC before the PC enters S4/S5 mode to enable a quick charge from non On/Off Charge USB ports. Charging results may vary by model.
*Whether to support 3X USB power design, it may vary by models.


SuperSpeed USB 3.0
GIGABYTE motherboards boast SuperSpeed USB 3.0 technology made possible through an additional onboard host controller. With superfast transfer rates of up to 5 Gbps, users are able to experience a theoretical 10x improvement over USB 2.0. Additionally, backwards compatibility with USB 2.0 assures users of long term use of their legacy USB 2.0 devices.

When GIGABYTE's Turbo USB3.0 feature is enabled, it provides the fastest possible USB3.0 performance by allocating PCIe lanes to directly connect the CPU and USB 3.0 controller chip. This provides approximately 10% better performance than when it is disabled and USB 3.0 traffic is directed through the chipset.
Note: Turbo USB 3.0 utilizes 8 PCIe VGA lanes, so it is only possible to enable it with a single graphics card running at PCIe x8 on P67 chipset motherboards, or while using Intel® HD Graphics from the CPU (i.e. no VGA card) on H67 chipset motherboards. It is an option for high bandwidth users.


Turbo XHD- Full Automatic RAID 0
GIGABYTE Turbo XHD provides a quick and easy way to boost your hard drive performance by automatically detecting 2 new SATA3 HDDs and enabling users to effortlessly set up a RAID 0 configuration via an easy to use utility. RAID 0 boosts HDD performance by up to 4X.
Turbo XHD function only enabled for the SATA controllers integrated in the Intel Z68/P67/H67 Chipset.

HDMI™-The Next Generation Multimedia Interface
HDMI™ is a High-Definition Multimedia Interface which provides up to 5Gb/s video transmitting bandwidth and 8-channel high quality audio all through a single cable. Able to transmit superior, uncompressed digital video and audio, HDMI™ ensures the crispest rendering of digital content up to 1080p without the quality losses associated with analog interfaces and their digital-to-analog conversion. In addition, HDMI™ is compatible with HDCP (High-bandwidth Digital Content Protection), allowing the playback of Blu-ray/HD DVD and other protected media content.

DVI Support
DVI (Digital Visual Interface) is a video interface standard designed for carrying uncompressed digital video data and to maximize the visual quality of digital display devices, such as LCD monitors, digital projectors, and so on. In addition, the DVI interface is compatible with HDCP (High-bandwidth Digital Content Protection).

Display Port Support
Selected GIGABYTE motherboards feature DisplayPort, a next generation graphics display interface that delivers up to 10.8 Gbps of bandwidth over standard cables, providing billions of colors with the fastest refresh rates and the greatest color depths.

* Whether SMART QuickBoost is supported depends on the motherboard model.

Cloud OC
GIGABYTE Cloud OC is a free overclocking application that facilitates PC overclocking through any web browsing capable device such as a smart phone, iPad, iPhone, Netbooks or notebook PC. Being browser based, it connects via wireless Internet, Bluetooth or through an Ethernet cable, and its many functions are categorized into three tabs: Tuner, System Info and Control...more

AutoGreen- Greening your PC via Bluetooth cellphone
AutoGreen technology can automatically save power by simply putting your PC in a state of sleep when your Bluetooth® cell phone is out of range of your computer.
Note: GIGABYTE motherboards do not include a Bluetooth® receiver; the addition of a 3rd party Bluetooth receiver is required.

ErP Lot 6 support
The ErP (also known as Energy-Related Products Directive) is part of the European Union's environmental regulations policy. It is based on concern for the environmental as the proliferation of electronic devices continues, and how to improve energy efficiency for a better and greener life. GIGABYTE supports ErP and produces motherboards that help you effectively improve system efficiency.
Quoted from:
Home site