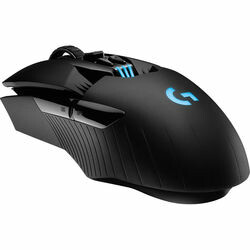 Release Period - 30 Jun 2017
Logitech G903 Lightspeed Gaming Mouse Review
G903 comes equipped with the PMW3366 optical sensor—widely regarded as the best gaming mouse sensor on the market. PMW3366 has zero smoothing, filtering or acceleration across the entire DPI range (200-12,000DPI), delivering exceptional tracking accuracy and consistent responsiveness at any speed. For even better accuracy and speed, use surface tuning in Logitech Gaming Software to tune the sensor to your playing surface.

Fully-configurable button layout and ambidextrous design allow for left- or right-handed use that works with nearly any mouse grip style, including palm, claw and fingertip grips. For those who want a little extra weight, G903 comes with an optional 10g removable weight.

G903 features exclusive clock-tuning technology that significantly reduces sensor power draw, so you can play for a continuous 32 hours — an entire competition weekend — on a single charge.* Battery Assistant in Logitech Gaming Software keeps you informed about your charge level and gives you an estimate of your remaining battery life.

Plug in the data and charging cable to seamlessly switch between wireless and wired modes without interrupting your game. Use the included USB adapter to keep your LIGHTSPEED USB transceiver nearby to quickly switch between modes.
Quoted from:
Home site