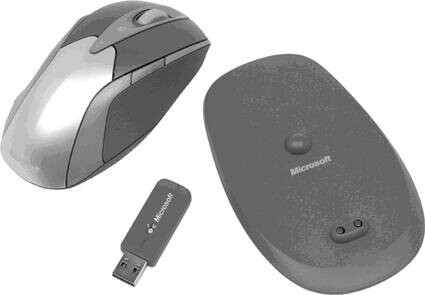 Release Period - 05 Aug 2007
Microsoft Wireless Laser Mouse 8000 Review
When Microsoft's $300 Wireless Entertainment Desktop 8000 comes out this September, it will be more expensive than any other prepackaged mouse-and-keyboard combination currently available. And as feature-packed as this wireless rechargeable desktop set might be, we're not confident that very many people will want what Microsoft has to offer. With no number pad, the keyboard is not ideal for an office environment. And thanks to a clunky recharging station, we can't see too many people setting this up in a living room. If you're in the market, then, for a $300 desktop set best suited for watching movies while leaning back in a desk chair (dorm-dwellers, we're looking at you), you might be interested in this new set. Regardless of how you might use it, we suspect most people will simply find the price too high.

We'll start with the keyboard. The keyboard in the Wireless Entertainment Desktop 8000 set is basically the same as the 7000 version we reviewed a few months back (and our criticisms of its oversized keys remain) but with a few improvements. Cosmetically, Microsoft applied a silver finish to the keys, giving it a lighter look than the 7000 model. It also added the most advanced backlighting we've seen in a keyboard. A motion detector on the front edge senses whether there's a body in front of it. If you're not there, the lights go off. Further, a built-in ambient light sensor detects the light level in the room and adjusts the intensity of the soft white backlighting accordingly. It also has function buttons for you to set the light level manually.

The other primary new feature is that the 8000 keyboard is rechargeable. It comes with four NiMH AA batteries, and Microsoft claims about a week between charging times, depending on backlighting usage. The top edge of the keyboard slides into a small, inelegantly designed charging station, which also doubles as a USB hub and the charging dock for the wireless mouse. That actually brings us to the clunky design of this desktop set's charger, and our main gripe with it.

Uniquely, the Wireless Entertainment Desktop 8000 includes a standard Bluetooth USB minireceiver that actually connects to a USB port in the bottom of the charging station. The somewhat sloppy result is two cables coming off the back of the charger, one to your PC, the other for power. You can also connect the Bluetooth receiver directly to your PC. That method gives you more flexibility in where you put the charging station, although by not plugging it in to your PC directly, you miss out on the charger's spare USB ports.

We certainly appreciate the added USB ports, but when you consider the Logitech diNovo Edge and its simple, display-style charger (which lacks any kind of data connection, USB or otherwise), you can't help but wonder if Microsoft could have tweaked the fit and finish of its charging dock to make it less visually bland.

As the only other rechargeable wireless keyboard on the market, Logitech's diNovo Edge remains the main competitor to the Wireless Entertainment Desktop 8000. When it came out in December 2006, the diNovo Edge cost $200. Now it retails for as low as $140. It doesn't come with a mouse, and its media keys are far inferior to those on the Microsoft keyboard, but it also has a much more polished look and feel, at least to our taste. Perhaps you're willing to pay $100 to $150 more for a workaday wireless mouse and better media controls, but Logitech's keyboard gives you most of the functionality of the Wireless Entertainment Desktop 8000 for significantly less. Any missing features you can likely make up for with a separate mouse or a PC remote control. We even suspect you could pick up one of each, along with the Logitech board, and still keep the price below $300.
Quoted from:
Home site