There is but a matter of weeks left in OSUBoarder's epic quest to not only play 365 games in a year, but to write about every single one as well. As 336 games bite the dust, the time has come to look at an absolute classic of yesteryear that is set to get a hugely anticipated reboot in February 2014.

If you want to check out a few more of the entries in this mammoth daily gaming task, you can visit OSUBoarder's full collection of 365 Days of Gaming Blogs here... 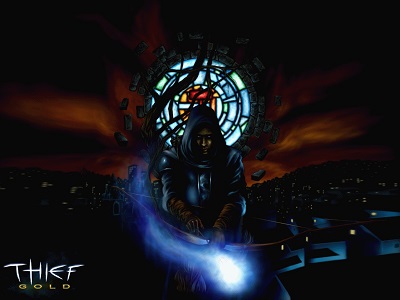 Thief: The Dark Project is a stealth game by Looking Glass Studios that was released in 1998, as well as in 1999 with expanded content, earning the name Thief Gold. For many people, Thief is the original true stealth game and is the grandfather of the modern stealth genre. It was one of the first games to utilize the idea of differences in light and sound to create a stealth atmosphere beyond just being within an enemy’s sight cone.

Thief is played in the first-person perspective and takes place in a fairly close-quartered three dimensional world created on the Dark Engine. You play as an up and coming thief mastermind who has been trained in the skills by wise mentors. Through this training you gain the skills to sneak around and “acquire” the objective item for that particular level. Thief takes place in an interesting world that seems to be a cross between Medieval Europe with some modern technologies like electricity as well as some of the magical and surreal. The best way to describe the world would be to think of it like the 90s version of Steampunk, before the idea of Steampunk really took off in the way it has today. When you walk around “the City” you often can pick up notes and overhear conversations from NPCs as well as watch their movement to get the feeling that the town does actually go on around you. These are things that we take for granted today but in this time, first person games were generally shooters that were constructed by attaching multiple rooms or arenas together to create a larger level. 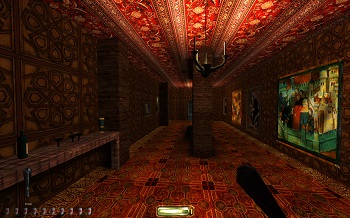 The game is simple in it premise in that each level is basically you being told to go steal some item and then going and, well, stealing it. The beauty is that you have some freedom of choice as to how you will carry out the mission. While the game definitely encourages evasive techniques over direct combat, it is still possible to fight your way through the level. You are given a sword as one of your primary weapons that you can use to slash, chop, and block when fighting against enemies. You also have a blackjack, a leather striking weapon that you swing in a ridiculous manner causing the guards to turn into a sack of potatoes and fall awkwardly to the ground. Speaking of bodies, you actually have the ability to pick up dead or unconscious bodies and hide them to avoid further suspicion. While other games have AI that will attack if they see you or hear you coming, the NPCs in Thief will get suspicious and be on edge while starting to look for the disturbance. The fact that a game from 1999 does this is even more impressive when you consider that there are stealth games today that do not bother to put in a feature like this.

Besides a few other features here and there, the game plays surprisingly like any modern stealth game but with the blocky graphics typical of the era. Along with the sword you also have a bow and arrow which is sort of the primary weapon of the protagonist in the Thief games. The bow has very limited range, even for a bow, but it is not too big of a deal because of the relatively cramped quarters that you will be playing and moving around in. The only real issue I had with the game is the default control layout and the system for changing key bindings. It took some time to rebind the keys to a layout that made sense to me and even then it was a little weird but it was still playable. 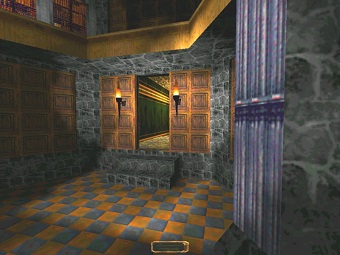 Many of the features in Thief did not stand out to me at first because they were elements that I take for granted in modern stealth games. I had to constantly remind myself that this game is almost 15 years old and was quite revolutionary for its time. Actually, this game is probably one of the big reasons that these features have become a mainstay in the genre. It took a little bit of work to get the game to a comfortable level of function for me but once you figure that out it is quite the experience. Don’t expect a level of gameplay similar to Dishonored but prepare to be impressed if you have not played it before. You may as well check it out now so you can get yourself in the mood and in the mindset for the upcoming reboot.

I remember the awesomeness of that game, I'll buy it to play it again!!

My friends: Hitman was the first good stealth game
Me: You ever heard of the Thief series??

You ever heard of Metal Gear Solid? Although TBF that was PlayStation only :-(

MGS came out before thief? I thought it was the other way around.

i liked the game very much, but it was pain in the ass not knowing where to go or what to do(sometimes)
AND for those who want to play this game, wait till 10th december for HD textures!

In new thief there is probably huge ass pointer telling you where to go and what to do im happy they atleast removed the quick time events.

makers said you'll have an option to disable all the "helpers" in game because they said they understood various types of gamers would play the game...

If only bethesda understood that :/

hah Skyrim is almost impossible without markers on minimap :Ä

That's what I mean, you can put the markers out but it's totally unplayable. There are some mods to make it better, but having it explained is still much better

Haven't played any Thief game before. I'm pretty excited about Thief 2014 after seeing the trailer. :)

This got my excitement up for the upcoming reboot :)