345 games down, just 20 to go. OSUBoarder is now approaching the end of his year-long mission to play and write about one game a day for a year in the 365 Days Of Gaming blog. For day 345, he tackled free to play MMORPG Age of Conan: Unchained, the game formally known as Age of Conan: Hyborian Adventures.

If you're stuck for some ideas for what to play this weekend, or just want a reminder of some old classics and new gems, you can see all the entries in the 365 Days Of Gaming blog here. 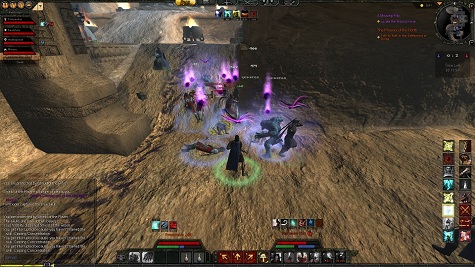 Age of Conan: Unchained is a free to play MMO developed by Funcom and published by Eidos Interactive in 2008. Though the original game went by the name Hyborian Adventures and required a monthly subscription, a free to play version was announced and later added to Steam in mid-2013. Hyborian Adventures is the first in a planned series of games based off of the books by Robert Howard set in the same universe.

In Age of Conan you take on the role of one of four races and 12 classes. Each race has its own lore and backstory as well as strengths and weakness. Because of this, certain races can or cannot be certain classes. For example, one race is a predominantly warrior community and thus cannot become a sorcerer or priest. Some other classes include Assassin, Ranger, Soldier, and Necromancer. I decided to with the Stygian race, a group of sorcerers, in the class of demonologist. This class specializes is the dark arts but also has an affinity for daggers, crossbows, and thrown weapons. I have never been much of a tank or strength player in MMOs so I tend to go for a ranged class. Your class also effects which items and gear that you get to use throughout the game as well.

Once you select your class you are thrown into the story where you are a slave on a slaver’s ship. A massive storm overturns the boat and you are tossed ashore of Tortuge, the pirate haven (not to be confused with Tortuga). As you come to a man informs you that the slaver has survived and is making his way to the city. If he makes it there, he will inform them that the ship had slaves on it and you will not be allowed into the city because they forbid slaves. Your first mission is now to track him down through the jungle and kill him so you can make your way into the city.

You will soon find yourself face to face with a group of marauding looters who are not pleased to see you going through their camp. Combat is an important part of Age of Conan and I think that they took and interesting direction compared to many similar games. The developers implemented a system that they call “Real Combat” that allows you to actively attack from numerous angles as opposed to an automated system where you lock on and let the computer take over. Attacks are controlled by hotkeys which are set by default to the number bar. The physical attacks are separated into the directions that they are performed in such as stab, left slash, right slash, and diagonal attacks starting from one of the four corners and going to the opposite. This holds true to an extent for magic attacks but is not as prevalent as melee. These directions are important because of the combat mechanics that Age of Conan implements. As you are fighting an enemy, markings will appear on different sides of them to indicate where they are currently shielded or are guarding themselves. It is in your best interest to attack from whichever direction they are not currently guarding as it will do more damage and end the fight sooner. 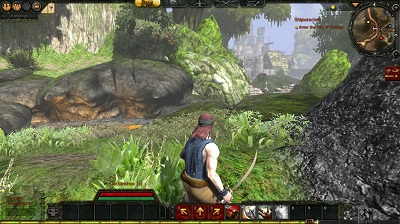 I actually really enjoyed this combat system because I felt like I was actually doing something as opposed to clicking on my target and letting the AI take over. My only complaint is that often it was difficult to actually keep a target in front of you where you can attack. You can target enemy AI but you do not physically lock onto them. The controls to turn and strafe are a little weird because of the way the attack layout so it takes some dexterity to continue attacking while positioning yourself to both hit your enemy and avoid being hit by them. It is only a small complaint but it takes a little bit of getting used to before you really become confident with the fluidity. After some practice I did start to feel like the combat was more fluid and natural than taking turns repeatedly hitting each other in a repetitive manner. As you start to advance and increase your skill you will pick up better weapons as well as magic and powers that will greatly assist you in combat and do a little more damage than the broken bottle that I started out with.

With the exception of some stylistic and feature differences, Age of Conan will feel really familiar to anyone who is at home with the MMORPG genre, which is by no means a bad thing. Though this is more of a first look review, most of the quests felt like the standard “go here, get this, kill that” type of deal, but almost all MMOs are like that in the beginning. The problem with a project like this is that I do not get the time to play for days on end and really get a comprehensive experience. If you are looking for a new MMO to try out and you like some hack-n-slash as well as magic, Age of Conan is definitely worth checking out and you can find it on here or on Steam in the free to play section.