Only ten days remain of OSUBoarder's 365 Days Of Gaming, the epic gaming challenge where our blogger plays and writes about a different game every single day for a year. With the last few days in sight, OSU Boarder has some real classics in store. You can check out the entire 365 Days Of Gaming blog here to read a little more on the hundreds of games covered.

As we reach the last few weeks of the year, I am going to start taking on PC gaming classics that I have never played because it would not be a good blog without touching on some of  these games. In the last week we will count down some of the top rated classic games on PC but today I am going to look at one game in particular that I have watched a lot of people play without ever really playing myself...

Finally I am here to tackle one of the heaviest hitters in the PC gaming universe. What started as the small idea of a single developer has taken the Let’s Play world by storm and it remains as one of the most widely popular indie games to have been developed. I am of course talking about the brainchild of Markus “Notch” Persson known as Minecraft. What seemed like a simple blocky building game is now one of the most versatile and appealing games for gamers young and old. It is one that can be picked up by kids as young as 6 or hardcore gamers that have been gaming for decades and still be fun.

I would be willing to bet that most of you know what Minecraft is and what it is all about so this will be more of an experience sharing than a real review consisting of groundbreaking information. For those that are not familiar, Minecraft is a sandbox game that lets players explore and build in a three dimensional world made up of cubes of material that can be dug up and placed to create massive and incredible structures. You can roam along the surface or mine underground to collect building and crafting materials which in turn are used to create tools and items for your adventures. There are NPCs in the world such as sheep and cows which can be hunted in the day for food or monsters that will spawn at night and attack you. On survival modes you have to maintain a health bar and a hunger bar by finding and eating food while exploring whereas on creative mode you are given an infinite amount of materials with which to build masterpieces as well as the ability to fly and an absence of a health bar. 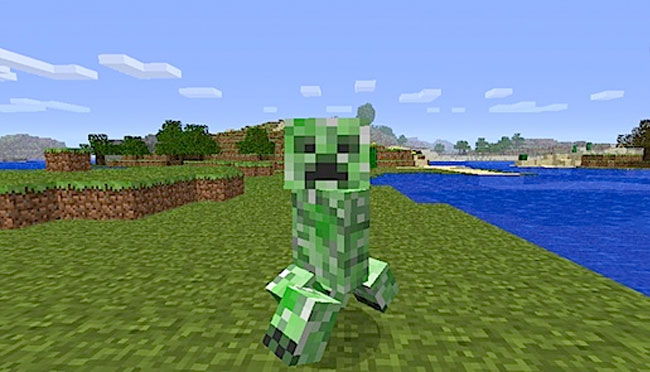 Minecraft is a game that I have wanted to get into for a long time but for some reason I could never get the time or money to buy the game, which has not gone on sale in years. That being said, I have watched countless hours of Let’s Players enjoying the open world and I thought I should finally get into it. I have most of the games that I want on Steam so I figured this would be a good time to take the money I would have spent on Steam and purchase Minecraft. As soon as you enter you are placed onto the surface of a randomly generated world, given some simple tools and are sent on your way. There is little in the way of in-game hints (though you can find them online) which makes it a learn-as-you-go experience.

Unfortunately I already knew what I was doing when I started so some of the wonder was lost, but there is just something about stepping into that game for the first time and taking in the world that you are in. I found myself surrounded by grasslands and mountains, desert and ocean, and countless cute little sheep and horses. You almost forget that night is coming soon and that you need to find some shelter before you meet the less friendly denizens of the world. No matter how many times I watched people online running into them, it caught me off guard the first time I accidentally ran into a creeper and just narrowly avoided meeting my untimely demise so early in the game.

Besides the sheer wonder of the game, there is something pure and relaxing in the exploration and mining. The repetitive digging or building combining with the relaxing music and sounds of nature puts you into a calming trance that was a nice break from the chaos of the holiday season. For in those moments there is nothing else but the swinging of that iron pick that you made by yourself with the materials that you collected after fighting off a creeper and not dying. Then you remember that you are out of food and need to go find something quick before starving. You soon find yourself creating a balance between exploring and survival. 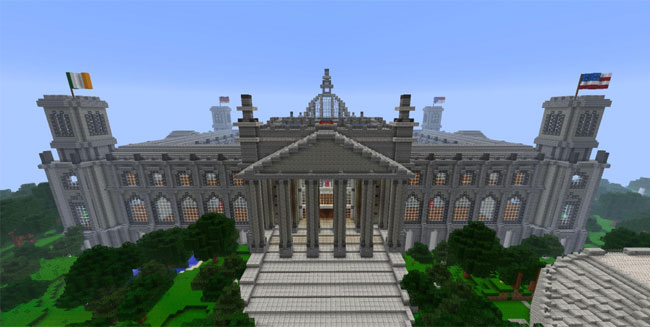 The beauty is that the world is almost endless due to the unique way that the world is generated. Although there are limits on how high or low you can go, the horizontal movement is generated as you get to it by rendering in chunks which allow a theoretically infinite world. Of course there are computer limitations that create errors as you start to get really far away, into the “far lands” but the amount of area that is still stable is absolutely incredible. I have been playing Terraria on a “small” world size for over one hundreds hours and am still finding new things. To even try to comprehend the scale that is available in Minecraft is almost impossible for me. As a lover of the open world game, this is almost the epitome of the genre.

Another cool part about this game is the ability to share and download creations of users that are infinitely more creative than I and have much more time on their hands. By allowing the ability to essentially create other games within Minecraft, it has almost unlimited replay ability. Some people argue that it gets old after a while but as long as I have a new cavern to explore or an elaborate idea in my head, I will be happy. There are those out there that recreate famous buildings or items from other games plus one man who create a working calculator using redstone and an incredible mechanical knowledge. This amount of possible gameplay is one of the reasons I can still justify the price of the game and the fact that is pretty much always a flat price that does not go on sale. 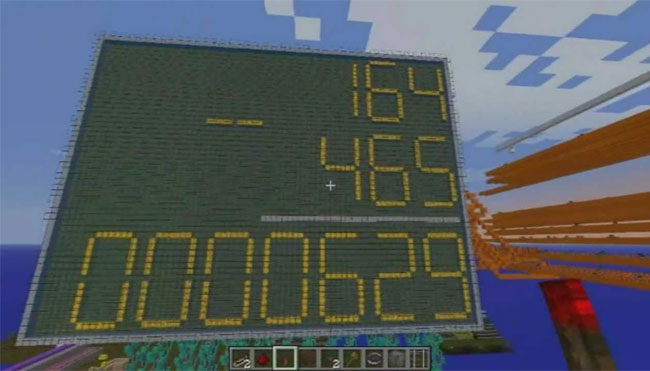 Minecraft is by no means a new thing but anyone that has played it will agree that there is an element of wonder when you first set out into the world with nothing but a wooden pick and some bread. It is a game that you can sink in a few minutes or hours into at a time with some people putting hundreds of hours into one build project. Take a second to google some Minecraft creations just to see the possibilities that are out there. I also love it because it is incredibly relaxing and does a good job of relieving stress. If you want see more of the game, just YouTube it and thousands of amazing videos will show up. If I might recommend some videos, look up the Achievement Hunter’s videos that I have been binge watching the last few days. Also, if you want to try the game before you buy you can download the demo from here that gives you an hour or so of game time to try it out. There is something about actually playing it that no video can describe or match.

Texture packs and mods are great on PC, they really make the game so much better and increase the replayability (if that's a word) by a lot. You just don't get the same experience on console.

Just bought this for PS3, it's just so much fun to play with my little brother on splitscreen. Though i have had this for PC over a year i just haven't gotten into PC version so much.

The community or shared gaming is what really makes this game great. It us fun by itself but even better when you have a group of people to explore,build, or compete with.

10 more days, it's like it was yesterday that you've started this it was an awesome journey i still remember the first time you started this

I know, it seems like time has just flown by. I cannot believe it is almost done!

A great game, can't say anything else.
If you haven't tried it, and think it might be stupidish, give it a shot! :)
I quarentee it will be worth it! :)
But it needs a surprisingly beefy pc. My rig "all maxed out" 100-450 fps

I think it's great that this game manages to run on a PC with HD 1000 graphics! You've got to remember how low end that chip is. This is the kind of game that scales well from low end to high end PC's, I like that :)

The only thing why I like intel hd 1000 and up is that it is good optimized to handle big textures. Shaders not, that is why every game lags. Look at bf3/4 got amazing shaders, won't run. Look at BF2, has almost no shaders, runs 60+ FPS