Anyone remotely involved in the world of gaming from the hardcore consolephile to the casual industry observer will have noticed the vast increase in the popularity of mobile gaming over the last few years.

However, a new report issued today by the IDC shows us the real extent of this meteoric rise in fortunes of the mobile gaming industry for 2013, as well as indicating the real winners in this boom…

Google has been slowly advancing its mission for world domination for the last few years now, so it will come as a shock to precisely no one to see that they’ve seen significant advances in terms of mobile gaming sales from the Play Store. Four times as much money was spend on Google Play games in Q4 2013 as in the same period the year before. iOS sales also more than doubled, and iOS continues to dominate the mobile gaming market in pure sales terms. 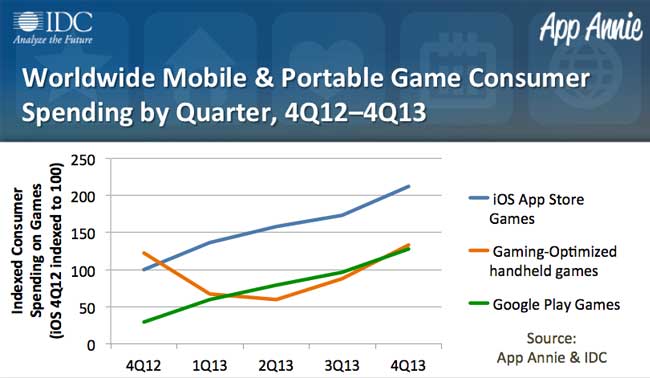 These figures were undoubtedly aided by the increase in relative affordability of smartphone technology, with more and more people now possessing either tablet, smartphone or both. Lewis Ward, head of gaming research for the IDC, outlined both this as increasing wealth in developing nations as key sources for the sales explosion.

“The Google Play ecosystem in particular benefitted from a big regional upswing in the installed base of smartphones and tablets in 2013, but rising living standards in Asia-Pacific countries generally also buoyed game spending.”

According to the stats, however, gaming on the go is yet to be fully dominated by smartphones. Nintendo’s 3DS and PS Vita games didn’t see the same kind of sales explosion as Android and iOS games, but overall spending on these two platforms rose by about 9% between Q4 2012 and Q4 2014.

It looks like it's a good time to be involved in mobile gaming, although we are hoping that the kind of market boom we are seeing currently does not encourage more of the kind of game cloning and greedy "free" to play models we've had to put up with in recent months.