Android Makes Significant Gains Over iOS In USA And China

The latest data on OS market share is out, and it looks like Android is well and truly poised to dominate the market after a sublime first quarter.

The data shows huge gains for Android in both the USA and China, whilst Windows Phone showed small gains in the EU and Australia…

When compared to the same three month period in 2013, Android has shown a huge leap in the USA, gaining 8.3% of the market share and now controlling an impressive 57.6% of the US smartphone market. Apple’s 12 months in the USA was nearly as bad as Android’s was good; it lost around 7.8 percentage points and now accounts for just under 36% of the market. Windows showed a tiny .3% loss in the region, but still came in third at 5.3% overall.

iOS had nearly as bad a year in China, losing 5.4% of the market since Q1 2013, and controlling just 17.9% of the Chinese market. Probably partly thanks to the fact that the biggest Chinese manufacturers are all Android based, Android is streets ahead in China with a near monopoly in the country of 80%; 8.1 percent bigger than last year. iOS’ biggest success story was Japan, where an 8.6% gain helped Android edge ahead to a 49% market share.

It looks like Europe has been the best region for growth of the Windows Phone. Italy was their strongest nation, where a 3% increase has actually taken Microsoft’s platform into second place ahead of Apple. Windows Phone saw an overall increase of 1.6% in the five EU nations - Great Britain, Germany, France, Italy and Spain - included in the data. Whilst Android’s star continues to rise, we might see it emerging as the dominant force in the next calendar year if iOS and Windows Phone can’t do something to reverse the trend. 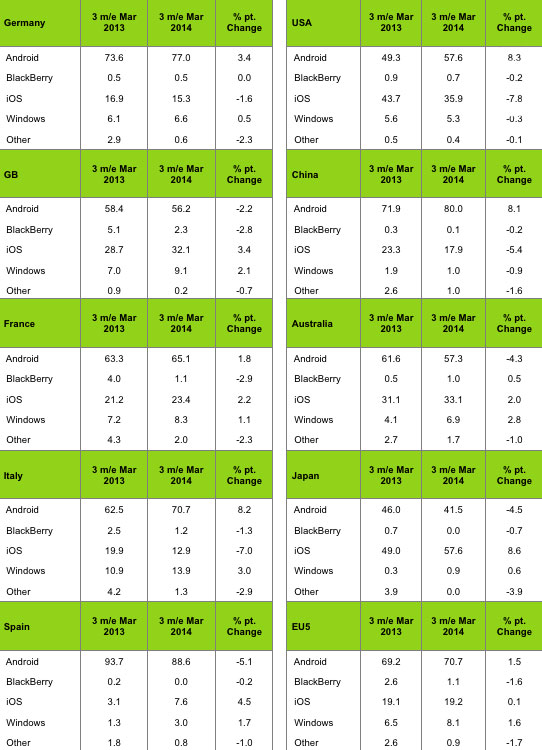