It might be a long road until the Warcraft movie reaches fans in cinemas, but according to director Duncan Jones, production will finish filming in just three weeks time.

According to Jones' Twitter account, shooting will end in the next few weeks and production shifts over to the editing and CG side, with the film expected to launch in early 2016...

Gaming franchises aren’t known for producing spectacular feats of cinematography, and 2014’s Need For Speed film was the latest adaptation to be thrown to the bargain bin. However, with a solid cast, strict overseeing by Blizzard and (allegedly) a rather impressive budget, we’ve still got some hope for this. Although it is frequently referred to as the “World Of Warcraft” movie, the film will actually draw on the whole Warcraft franchise, not just World Of Warcraft. The Warcraft movie will tell a Humans vs. Orcs origin story, focusing on the battle between Durotan and Lothar. 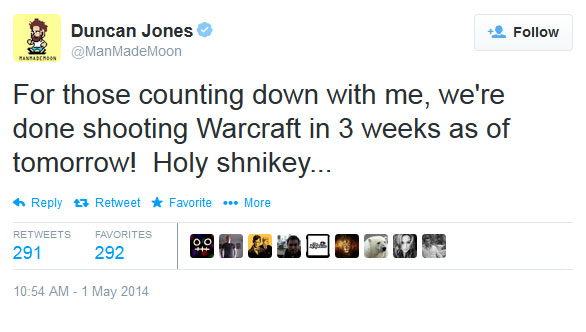 Filming might have nearly ended, but there’s still a heck of a long road ahead before we see Warcraft film released to audiences, as the film will naturally include a large CG component. The film was originally slated for release on 18th December 2015, but was delayed after it came to light that Star Wars: Episode VII would also be releasing in that same release window. The Warcraft movie is now anticipated for a release in March 2016.

For those Warcraft fans unwilling to wait so long for a fix, the latest World Of Warcraft expansion Warlords Of Draenor is slated for launch later in 2014.

What do you think of the idea of a Warcraft movie? Are you excited, or sceptical?

Let us know your thoughts in the discussion area.

i m excited! I mean, i didn't play WoW (besides 40 minutes) cause i don't like mmos and i couldnt keep up with the enormously bigger, and less serious, story.
so i stopped at warcraft 3 TFT, but kept on reading books, so i wanna see this!

That soldier on the right side looks good :D i just hope they will make a great franchise like LOTR they have a good story to make :3

as much as I'm excited about this movie it has been delayed so many times I'm pretty sure that we will not see it any time before 2017...closer to 18.....it's been long coming since 2011 already so idk I just hope it's worth the wait

Hope we will see LichKing!

probably at the end of the movie as a hint on the sequel....

Why would they add late bosses? The first movie is supposed to be about the beginning of the allies and the hordes.

common film marketing schemes ,
give them something to return to

Im so excited to see how will orcs and other creatures look :D and will be a storyline :)

What? I didn't even know they have already started filming it.

you think that's bad, I didn't even know they were making a Warcraft movie...