The “otome” genre of female-oriented, usually dating sim-style games have never really caught on much in the west, but have become rather well established in Japan in the last decade. But whilst most focus on trying to bag your protagonist the prettiest boy in the neighbourhood, 2011 title Hatoful Boyfriend had rather a different spin. It was a pigeon dating simulator.

With the recent success of Goat Simulator, it appears Hatoful Boyfriend has caught the eye of some innovating types at Devolver Digital. The publisher has just announced it will be working with Amatuer Surgeon devs Mediatonic to bring the avian-romance visual novel to western PC release so we too can try our hand at wooing … handsome pigeons …

It seems like they’re really winging it (ahem) with this one, and we don’t want to pigeon-hole (I can’t stop) this title as a game just for the chicks. In fact, we’d guess with a little persuasion, everyone will fancy a go at being the hottest bird in the neighbourhood.

There publisher has also unveiled some screenshots for the game, which don’t really make Hatoful Boyfriend look any less mad. In one screen, a pigeon going by the title of Okosan (who is, apparently, captain of the track team at the pigeon’s fancy school) challenges another bird to a naked pigeon brawl, whilst another shows three mohawked types strutting their stuff as the Baddest Birds in the Neighbourhood. Because why the hell not. 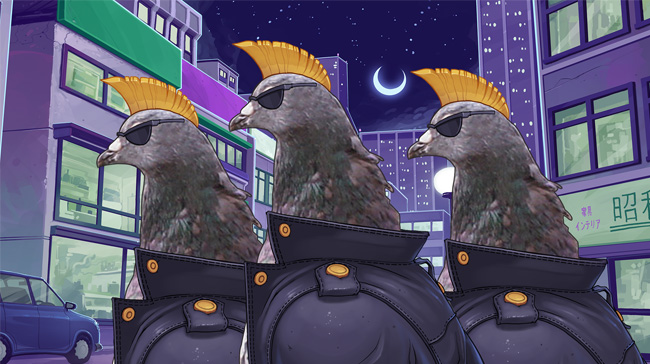 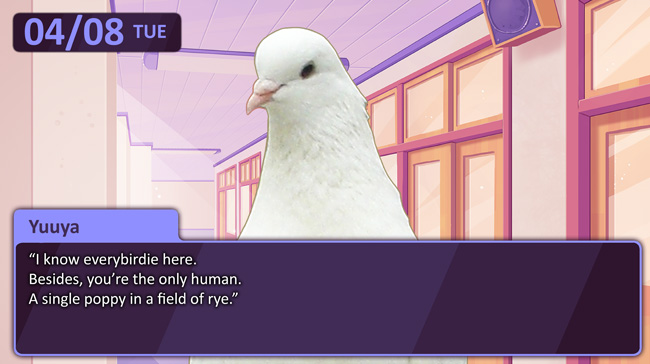 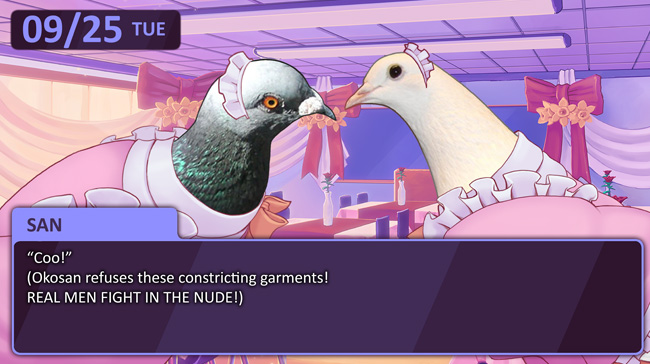 I never thought of myself as a dating-sim kind of gal, but if there’s one game that might convince me otherwise, it is most likely this one. If only for the dreadful bird puns.

Oh good maybe I can find myself the perfect boyfriend........that is a pigeon.... 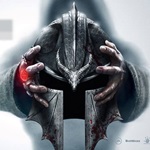 wow dude -_-
that was a very offensive and ignorant remark

everyone gets strange and stupid ideas, these guys realised theirs.... cool and lol

I saw this awhile back in Japan version, but a English version? Yes, Yes, Yes.

I wonder if it will include a sex scene! >:)

I'll chicken out before it starts... Taking into the consideration I ever even peck about

Where do I preorder this game xD

Oh, so this is a game. I thought they were making April Fool in June XD

Pigeon Dating Simulator... are we really that low on ideas for new games? >.>

Watch out guys, I think some birds flu in here and are dropping crap like its going out of fashion. #SWAG!

A pigeon dating sim? You've got to beak kidding me :D

what is this sh^t

Spoilers ahead: This lovely game features an ending in which the evil birdoctor turns out to be an evil spirit that must defeated in a Dragon Quest-esque battle and another one in which said birdoctor severs your head and keep it as a lover

I know this because, uh, a friend played it and told me. I, in no way, have played it start to finish through most routes. Nooot me. Nuh-uh.

Enjoy this video to find out more about the game :) http://youtu.be/Plb8GegfL2U