Nintendo's special E3 Nintendo Direct kicks off at 5.00pm UK time, or 9.00am PST, and we're psyched to find out exactly what the Japanese gaming giant will be producing in the next few months.

We're expecting news on Hyrule Warriors, Bayonetta 2 and Super Smash Bros. U among other things, but we're hoping there are a few really big surprises in store from a Nintendo keen to boost sales of its Wii U console. You can watch the whole thing live right here from 5pm...

So Nintendo may not have had a live conference in the same way as Sony, Microsoft and co, but they certainly began their conference in a showstopping way. We were pretty taken when the introduction was a stop motion animation Reggie Fils-Aime being heckled by stop motion Nintendo characters. Reggie Fils-Aime on fire as Wario ran on stage … not sure that was what we had in mind when Nintendo announced a digital conference.

And that was just the start of the madness, as the next bit of the show had Reggie and Nintendo boss Satoru Iwata had a live-action Super Smash Bros style kung fu battle to promote the new Super Smash Bros for Wii U and 3DS. Just … insane.

So first thing’s first: Super Smash Bros with a range of new features. Looks like you can now use your Nintendo Mii in Smash Bros, which is smashing, as I’ve always fancied watching myself simultaneously taking on Link and Pikachu. Your Miis are customisable, and can be one of three classes. The Brawler class is fast and empty handed, taking on opponents with their fists, whilst if you choose to play Swordfighter class, you’ll have a sword. Obviously. The third class is Gunners, who specialize in projectiles and long distance assaults, and you can further adjust your characters by picking 4 moves from 12 options. That’s a heck of a lot of potential options. 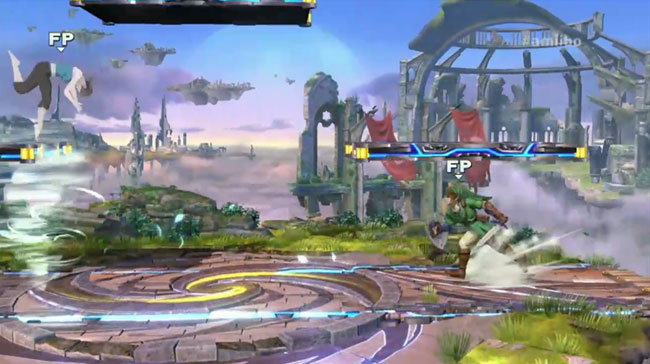 Super Smash Bros will be hitting 3DS on October 3rd, whilst the release schedule for Wii U is this year’s holiday period. Hopefully that means some good Smash Bros Wii U bundles in time for Christmas.

Moving on, it’s time for that rumoured “hardware announcement” from Nintendo, and this looks like it will be controversial, if rather predictable. Nintendo has announced Amiibo, which to all intents and purposes are Skylanders/ Disney Infinity with Nintendo characters. The figures can be plumped into compatible games (Smash Bros first, but Mario Kart 8 and recently confirmed Marioparty 10 - which stars Bowser -[ will also be compatible later on). They will save your data on them, so they can be levelled up and customised in various games. It’s a cool concept, but it does reek a little of pointless money-grabbing by Nintendo, and that’s never something we like to see.

Next, Nintendo’s E3 direct moved into a Yarn store, which we knew could only mean one thing. Yarn Yoshi. Or, as it will actually be called, Yoshi’s Wooly World (really? Ok, if you insist). The game will release in 2015, and will have 2-player co-op. They showed actual Wooly Yoshis, which were just so darned cute, Hello, plush merchandising opportunities. 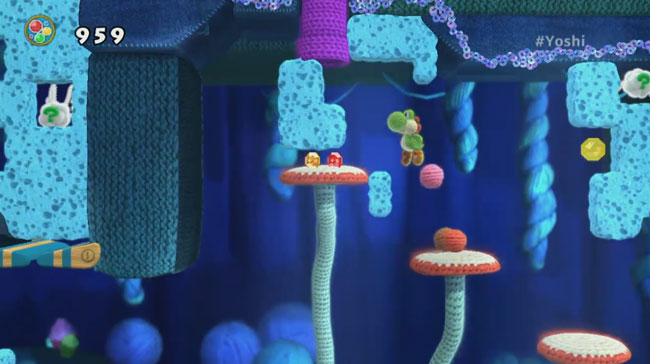 We then got a brief insight into Captain Toad Treasure Tracker, which is basically an entire game expansion of the Toad levels in Mario 3D world. It’s coming in the Holiday period 2015, further filling an already busy Nintendo schedule in Q4 this year.

Shortly after this, Jon and I had to take a break to hyperventilate and shout at the Nintendo Twitch feed about the new Zelda for Wii U, which will be FULLY OPEN WORLD. From the limited footage we saw, it looks like what Skyrim would look like if it was Zelda. So yeah, just wow.

I’ve been pretty damn excited about a number of games across various conferences this E3, but I have to admit that the announcement of a fully open world Zelda is the first time I’ve broken down and screamed SHUT UP AND TAKE MY MONEY this year. It’s a shame from a marketing perspective that Nintendo insists on creating solely first party exclusive titles. Can you IMAGINE the sales figures that might be reached if this game (which, let’s be honest, looks like Zelda meets Skyrim) went cross-platform? 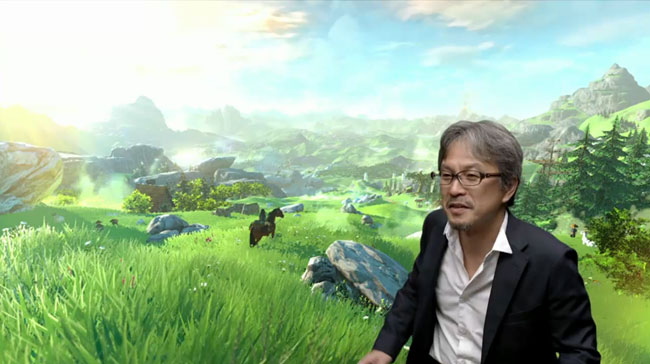 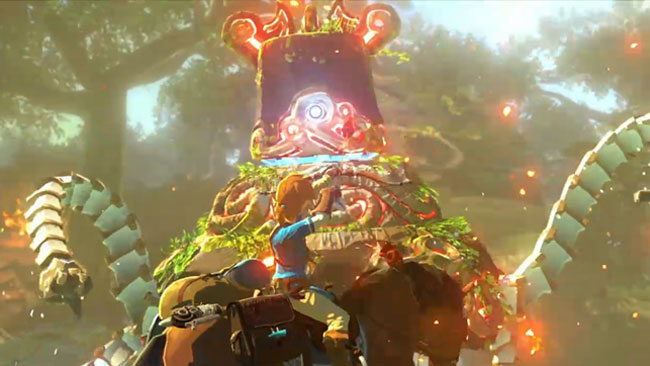 So after that moment of hysteria, we’re back on more stable grounds, as Pokemon Omega Ruby and Omega Sapphire remakes are. The games look quite a bit like Pokemon X and Y, and have a bunch of 3D content, which will be nice for those who were big fans of Gen 3 Pokemon. Then it’s on to Bayonetta 2, being badass as ever in the manic, multicoloured hack ‘n’ slash. I might just go out on a limb and say it’s probably one of the most Japanese games I’ve ever seen.

The news that the original Bayonetta will be included with Bayonetta 2 was a huge boon, too, and not something we expected. The titles appear to be coming bundled on the same disk, so hurrah for that; they arrive in October this year (please, guys, stop announcing games for October, I’m mentally already in my overdraft at the thought).

Then it’s time for more Zelda with Hyrule Warriors, which promptly gets a 26th September release date to mark what looks to be a busy few months for Nintendo first party content. 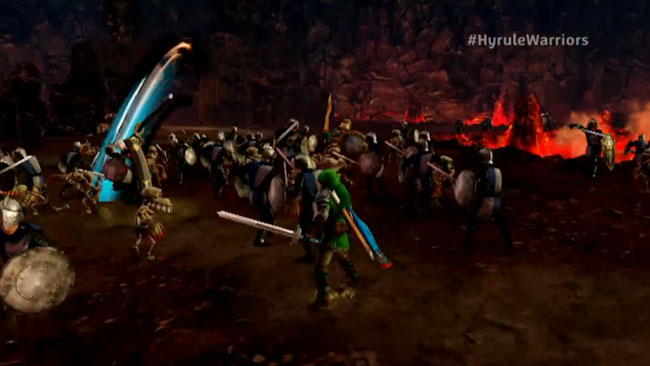 It claims to be a “fusion” between Dynasty Warriors and Zelda, but as far as I can see it is just Dynasty Warriors gameplay with Zelda characters, rather than a merging of gameplay styles. Midna, Zelda, Link were all confirmed as playable characters; this game pretty much has GUARANTEED HIT IN JAPAN plastered on it in gigantic, glowing letters.

After a short trailer for DS title Kirby and the Rainbow Curse - which lands in 2015 - we got a first glimpse and official title for Monolith’s new Xenoblade title. Predictably, they’ve gone with the name Xenoblade Chronicles X. Innovative. The game looks like it will be a big draw to Monolith fans, although is it me? Why do Japanese RPG developers seem to find it hard to make games that look as if they were made after 2005? You see it with the Tales games, and this looks similar; the graphics just aren’t very polished. Of course, there are more important things than mere graphics, but it is something to consider.

Mario Maker next; a recently leaked title and another 2015 release. You’ll be able to switch between the Wii U engine and 8 bit style, which is pretty awesome, and will no doubt be another popular title amongst the old Nintendo faithful. 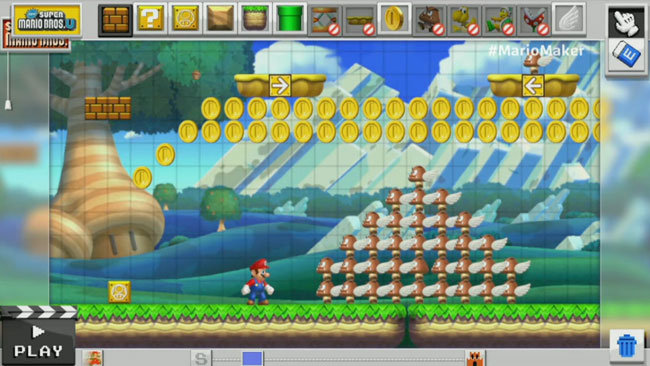 We’d heard Nintendo was announcing some new IPs at this year’s E3, and whilst it looks like a couple of these might be coming later in the week, one of them is 4x4 online multiplayer shoot ‘em up Splatoon. It’s an odd looking concept; you switch between human and squid, and gain territory by firing coloured ink everywhere. Your squid-self can move super quick in your own ink, whilst the coloured ink of other teams acts like glue to slow you right down. Imagine it as a squid-based Team Fortress with ink rather than bullets … kid of. 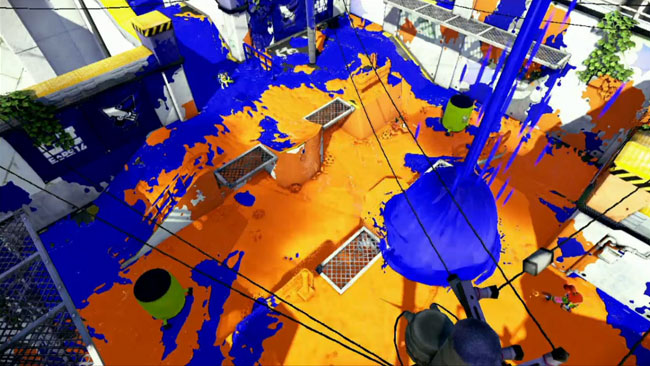 Aaaand after a relatively brief 40 minute presentation, that’s all from Nintendo Direct. We’re disappointed not to see any more about the recently confirmed Star Fox, although Miyamoto is giving a presentation later today that promises new information about previously unannounced titles. We reckon Star Fox could feature in this; you can check it out on Nintendo’s Twitch feed this afternoon.

What do you think of Nintendo's conference? Which titles are you most excited about?

Tell us what you think.

This is why I spent $299.99 for the Nintendo exclusives! All the other console games I can play on my PC but not Zelda!!

I may have to sell my soul.

Open world Zelda is the best thing from this whole conference, in my opinion.

I know, right? I nearly cried.

Open-world Zelda Game. That alone would've been enough to qualify Nintendo's event a massive success. This game will give a boost to Wii U unlike any other exclusive(s) will to their respective consoles for quite sometime. Just wow!