Gaming on Your Watch With Android Wear - Castle Wear

Who can remember the large Casio watches from the 80's that offered up our first look at mobile gaming? Frogger right there on your wrist, awesome! That fad died out and was replaced by the more powerful Gameboys. But it seems like we are coming full circle, yay!

Android Wear is the slimmed down version of the Google Android operating system that is built specifically for smartwatches and various alternative wearables. Normally these wearables are used to hook up to your phone and offer up some extra info, like notifications etc directly on your wrist. Well we have just spotted a watch game called Castle Wear and its now available in its Alpha stage.

Castle Wear is a procedurally generated dungeon crawler that can currently be played on an LG G Watch, Samsung Gear Live, Moto 360, Sony SmartWatch SW2, NM2 and any android device with Andoird 2.3 or greater. The plot is simple enough, there is an evil sorcerer, Diordna, who has taken a talisman from a king. Using the talisman the sorcerer creates a maze below the kings castle. The king, now slightly mad, keeps sending adventurers into the maze to try and retrieve the talisman. 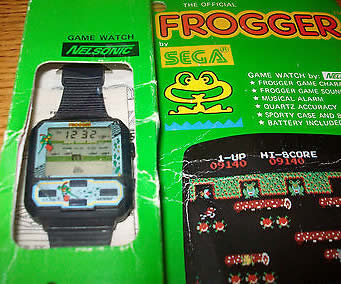 The controls are designed to work around the limitations of a tiny watch screen, for example, swipe up and down to move through menus, its got turn based combat etc. There are a few nice ideas in there as well, like, accidentally run into a wall and you risk making noise and alerting nearby monsters, recall where your previous party died and you can try and retrieve their items. You also have to revisit the Adventurers Inn anytime you want to regain your spell points or level up.

Its made pretty clear this is in Alpha and bugs are still present but we cant help but feel like this is going to take off, as we all seem to want more gadgets and once we have those gadgets we want to play games on them. One of the technological pitfalls we faced was the battery life on these smartwatch devices, only one day tops for the Moto 360. But a recent update has seen the Moto 360 lifespan more than double, according to owners of the watch. This might make it a plausible option, when it comes to gaming on the android wrist device.

How do you guys feel about gaming on your wrist? Is this an area we want to push for complimentary gaming experiences for the usual triple A devices. Imagine using your watch to monitor a games online stats or mapping out your next weapon load or even playing turn based titles like civ.

This is ridicoulus. Noone needs this, maybe some exceptions.

I find the idea of a smar****ch useless,as it is not a stand alone device since you have to carry around your phone.Phones where the reason that normal watches became unpopular...As for gaming in a watch,it's even more useless.I don't even game on my 4.7'' phone(except when i'm in the bathroom or really-really bored),i wan't game on an 1.5'' screen.

That means we can play anytime we want.. when watch is around our wrist! :D

The company has got nice thinking. I think Castle wear will go better than Watch Dogs!! :)

stop downvoting him people, i can understand his joke
watch dogs didnt live up to the attention it was getting...