5 Of The Best Sci-Fi Horror Games

As Alien: Isolation has been unleashed upon us and breathes fresh life into the iconic Xenomorph that's been prowling around our screens in one way or another for 35 years, it seems the perfect time to take a look at some terrifying games that have delivered us a satisfying blend of science fiction and horror over the years. The science fiction and horror genres crossover so easily into one another it’s hard to tell sometimes where to draw the line between them. Two such expansive genres meeting has almost endless potential for the directions it can go in.

This is by no means a definitive list of the best sci fi horrors, everyone has their own fears that different games will tap into. Thats another thing that makes this genre so great, so much of it is subjective. What we may find so terrifying someone else may find laughable, and vice versa. Rather, this is a list of five truly great sci-fi experiences with than than chills to satisfy the most ardent horror fanatic.

Alien: Isolation is the game that inspired this piece so it seems like the best place to start. What Alien: Isolation has done is brought the xenomorph right back to it’s roots, to where it all began, and not just because she gets to hunt someone called Ripley again.

Whereas Alien games up until now seem to have derived their inspiration from James Cameron’s Aliens, the most obvious source to be fair, Alien: Isolation takes its inspiration from the 1979 original, doing away with the endless rounds of bullets, the MF1A Pulse Rifle and the gung-ho attitude of the colonial marines. Instead we’re delivered much of what we felt with Ripley on the Nostromo so many years ago. Isolation, unsurprisingly, is the overruling feeling here. Stuck on the space station Sevastopol with only a few aggressive survivors, equally unwelcoming androids and, of course, a creature designed to be the perfect killing machine left aboard. You really are all alone.

The few weapons you’re equipped with aren’t effective against the Xenomorph, and it’s quick to track you down should you attempt to let rip. This culminates to a feeling of utter helplessness, often leaving you no option but to just hide and pray for your survival. There really is no option to fight back. To add to this, developers The Creative Assembly designed the space station with the design of the Nostromo firmly in mind. Dark, dingy rooms, small corridors, and even the chunky retro style computers and hardware add to a feeling of claustrophobia. Alien Isolation has delivered us a great piece of sci-fi horror, not allowing you the option to attack when the flight or fight instinct kicks in, and not giving you many places to run. 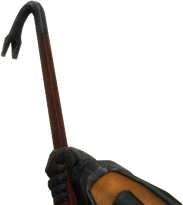 Half-Life has left a legacy and created a long suffering fan base like no other game. The first time we got introduced to Gordon Freeman at the Black Mesa Facility was way back in 1998. I can still remember vividly the moment that the experiment goes wrong and you get transported briefly to the Xen, to glimpse the horrors that you’ll have to confront throughout the game. From then on in I spent the whole game debating whether or not I should continue.

Half-Life's most iconic alien being, the Headcrab, is a hideous creation, as are so many of the other regular beasts Gordon encounters throughout the game, with the barnacles possibly worst in appearance. They all looked nasty in 1998, Half-Life 2 made them even more disturbing to encounter. Just imagine how horrific they’ll look when Half-Life 3 come around!

Alien vs. Predator is the first game in which I encountered both the Xenomorph and Predator and it’s stuck with me ever since. Without a doubt the most effective aspect to the three pronged campaign in this classic game was playing as the colonial marine. In some ways it was the anticipation that built up the most fear in the opening few minutes of the campaign. Probably playing this game probably several years before I should have been, it’s those moments I recall most.

Still, to this day the ominous beeping on the motion tracker sends chills down my spine. Such an innocuous noise in itself but a terrible warning that something terrifying is just around the corner. The other campaigns were far from comfortable as well. Even as the Predator armed to the nines, things weren’t straight forward, having to constantly be on the move, on the look out for marines or the Predator-Alien hybrids. Alien vs Predator didn’t give you a moment to take a breath and kept the adrenaline pumping throughout. 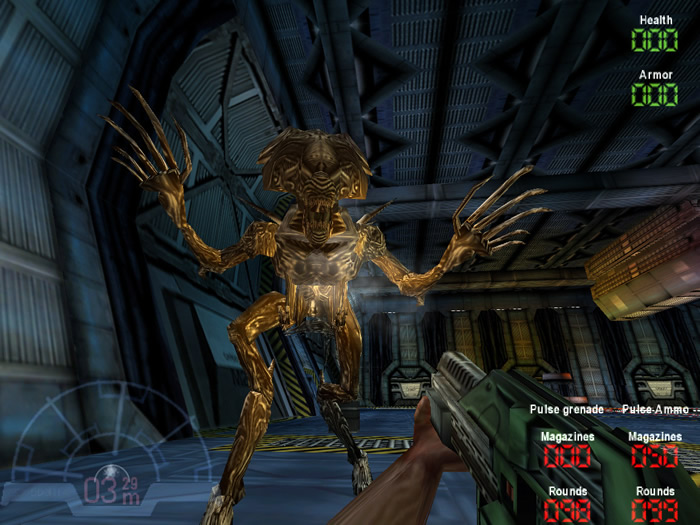 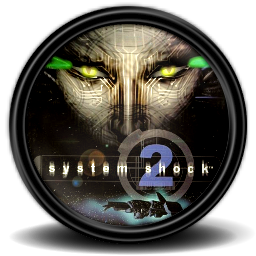 System Shock 2, the game that is hailed as the forefather to the Bioshock and Deus Ex series. Set in a dark cyberpunk envisioning of 2114, System Shock 2 improved on its predecessor in adrenaline and scares. The protagonist is a soldier, who awakens on board a spaceship to find the crew either killed or infected with a virus that turns them into killers, with a hive-like mentality. Already sounding you're in a spot of trouble, it gets even more disturbing when the voices of the infected crew, known as The Many, telepathically speak to the player in a bid to convince you to join their new level of existence.

Even with the admittedly dated graphics now, the final section of the game through the giant biomass of The Many is pretty revolting, akin to walking through a living sewer. If System Shock 2 were to be recreated with the visual standards of today it would be truly grotesque. The squelching sound effects with each step through these tunnels has lost none of its uneasy feel. The System Shock games were an early impressive entry into the sci fi horror realm, the legacy of games speaks for itself when looking at the AAA titles they have gone on to inspire.

EA’s Dead Space is one of the more recent titles to make it on to this list. Dead Space is the ultimate mish mash of sci-fi horror tropes, borrowing from a number of other titles on this list, along with a knowing nod to Resident Evil. This however doesn’t have a negative effect on the game at all, if anything the fact you can pick out its influences actually works well for it. Dead Space has lots we’ve seen before; a seemingly abandoned spaceship; a botched rescue mission; viral infection; reanimated corpses; a hive mind; mind altering visions; company men with ulterior motives. There is a lot here that seems very familiar. Saying that, if you’re going to take elements of other sci fi and horror bits of media, it’s best to use the most effective ones. Which is what Dead Space does to a tee. 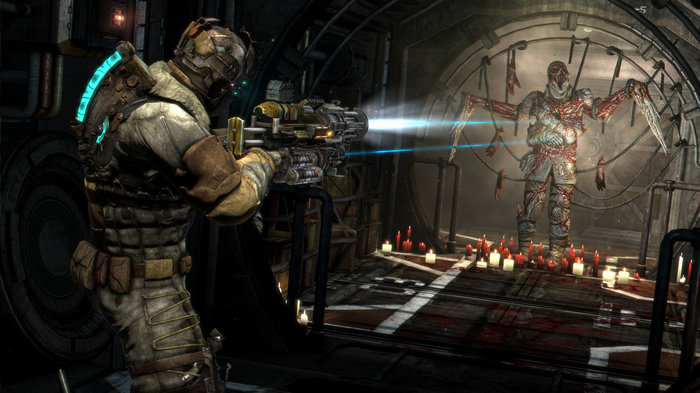 Playing as Isaac Clarke you battle your way through the spaceship USG Ishimura against the reanimated corpses of its crew, attempting to destroy the hive mind controlling them. The reanimated crew, or Necromorphs, are a really disturbing creation that can move from being creepy to downright terrifying at lightning quick pace! What it lacks in originality Dead Space makes up for in effective visuals, well crafted disturbing monsters and a heavily oppressive aesthetic, helping deliver a haunting atmosphere. Spawning a sequel that matched its predecessor for scares (along with that dodgy third outing), Dead Space is a fine achievement in the sci-fi horror genre.

What Science Fiction-Horror crossovers over the years have had you looking over your shoulder whilst you've been playing? Throw your suggestions into the comments area below!

Dead Space is probably the best Sci-Fi Horror game I have played. It wasn't just the visuals either, the audio and sound effects were so incredible and quite creepy and discusting. I must hand it to the foley artist, well done.

the first horror game i played was Resident evil 3 (Bio-hazard 3) back in Year 2000, well there are many games better than RE3 but It holds the greatest memory.

because it was my first game I played other than only 3 games i used to play (King of Fighters, Tekken and Street Fighter), it was in Jap so it was difficult and very first/New experience of gaming other than fighting games and It was FUN..

Bro do u still play king of fighters

let me know if u play kof online.

eh FL1 isn't really scary, yeah the beginning a bit but that's really it. it was a hel of a lot fun though playing it, and it was hard......
you could have added hl2's ravenholm, it has a really creepy atmosfeer

The game that really freaked me out, was Alone in The Dark 1 & 2.
But in Scifi genre, the one i realy enjoyed was DS 1

Dead Space 3/1 are right up the most pant pooping games I have ever played. Quit DS 3 after an hour of jump scares and grotesque monsters. I dont know how I stuck through all of DS 1.

I only played DS1 for the story, cause my first DS game was DS2. Honestly, DS2 is the best DS game ever.

FEAR 1 and 2 were quite scary as well, especially with that freaky girl.

Definitely, can't believe I forgot about them :D

The first horror game I played after my glorious return to gaming a few years ago. That damn girl was around every corner.

I was just about to suggest the same... FEAR needs to be on any list of good sci-fi horror titles...

System Shock 2 was an excellent horror game. Back then I was 15 and it scared the crap out of me. Now I'm loving Alien Isolation. It's a true Alien game :)

Is it scary? At least i didn't think so when i played it when i was about 12. Tough it has some horror in it, i would say it's more of a scifi shooter, than a scifi horror game.
It's a same thing with Half Life IMO.

Some say it is, I pIayed it when I was 28 ish ...... Not scary for me but certainly based in space with zombies and demons

It's definatly an iconic game.Agreed,it should be here. :)

Yeah scared the crap out of me back in the day, I'd say it's a worthwhile edition!

I don't want to sound like a 'Graphicshore' but System Shock 2 looks to old to be scary to me.

Well if u look back how many actual good sci-fi horror games have been made. The most recent alien isolation. And before A.I was dead space.

For a horror game to be good, I need to be scared. Old horror games don't do that for me.

Because they are old :) obviously.
But back in the time SS 2 was released it was scary as hell.

Maybe I wasn't scared because I wasn't even born when these games came out.