The first of two DLC packs on the way for The Evil Within focusing on Juli Kidman will arrive in early 2015, according to Bethesda Softworks. Sebastian Castellanos’ mysterious partner is set to take on ‘The Assignment’.

The add-on’s game director John Johanas spoke on the Bethesda Blog of the upcoming piece, saying that playing as the enigmatic new detective in the DLC allows for a different angle when it comes to tackling the mysteries surrounding the world and characters of the main game. Johanas cryptically adds, “She is a character who seems rather ‘aware’ of her situation, after all”.

The blog post also emphasises that the team decided and stuck to a clear idea of the things they wanted to answer, and those they wanted to leave open, and worked around those limits. New information is promised on the lore of Ruvik, STEM and various characters, whilst also asking and answering a full new set of questions about Juli's character, who he described as “much livelier” and more up for banter than Sebastian.

The last of Johanas’ hints about the upcoming DLC lie in the mention of two specific parts of the original game that had the most effect on the creation of the next part of Juli’s story: Chapter Five, where “you were trapped in a very oppressive area of the game and the horror element was at its strongest”, and Chapter Nine, which focuses more strongly on exploration and puzzle-solving in order to uncover more story elements. Make of that what you will - and keep us posted with your ideas!

The Assignment is pencilled in for early 2015 and doesn’t yet have an individual price- we’ll let you know when as soon as we hear. The Evil Within season pass costs $20/£14.99 though, and entitles you to The Assignment and the following two DLC packs - The Consequence and the Keeper, to follow later in the year. The Keeper allows the player to take control of the infamous safe-headed brute wielding a hammer. 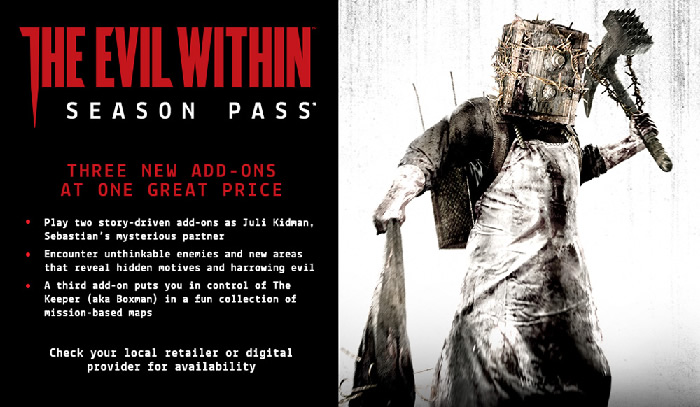 Might Juli’s own undisclosed past bear some grander meaning? Perhaps more to the point - what could ‘aware’ mean exactly? Are you getting supernatural vibes from the upcoming The Evil Within DLC?

Where have the old nice Free updates have gone to? I miss them :(

You know the best parts about this game to me came when i died multiple times and I finally realized that the game wasn't broken or hard it was just how i played certain parts that made them frustrating.