Apart from a handful of screenshots and a cinematic teaser though, we’ve seen hide nor hair of its upcoming theme park management sim. Originally in development at Pipeworks, Atari has now handed over the construction reins to a totally new developer, dubbed Area 52 Games. Comprised of a number of industry veterans who’ve worked on the likes of Tropico, Age of Empires, and Railroad Tycoon, Area 52 isn’t exactly short of talent, but it remains to be seen just what has become of the mysterious sim.

In conjunction with Area 52 Games taking over, Atari has launched a brand new RollerCoaster Tycoon World website, where it’s looking to provide regular updates and engage with the community through new forums.

“The new forums strengthen the Atari RCTW community so gamers can play an active role, hear updates, and have an open forum for engagement,” write the RCTW team.

“We are so excited to continue working on RCTW, and are 100 percent focused on creating the next great RCT game! 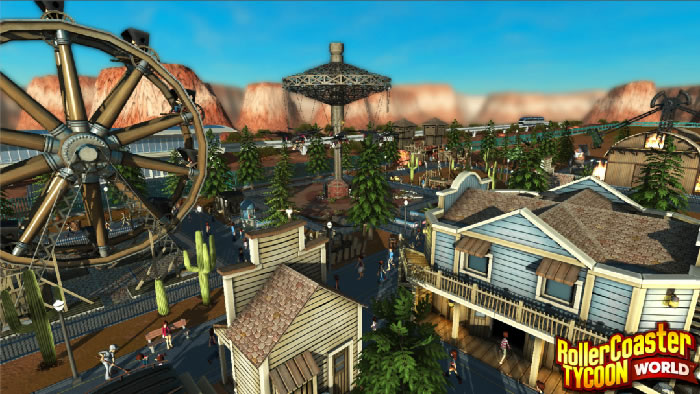 “We are thrilled to announce we are partnering with Area 52 Games studio, a AAA production house on the next phase of development for RollerCoaster Tycoon World. Specializing in online PC gaming experiences, the Area 52 Games studio has brought together a team of veterans who have worked on major IPs across simulation and strategy genres, including Tropico, the Sims series, the Railroad Tycoon series, the original Pirates, Age of Empires, Forza and other well-known games. Many thanks to [original developer] Pipeworks for all their efforts in getting us to this point in the development of the game.”

All in all it should mean that we can finally get a look at the hotly anticipated title in the coming months. Atari has reiterated that RollerCoaster Tycoon World will still be coming to PC in 2015, despite changing hands.

Do you have high hopes for what Area 52 Games can achieve with RollerCoaster Tycoon World? Or are you sceptical it can hit the heights of previous titles in the series?

I hope they move on with it already then.

Alright Area 52, let's see what you got! Please don't let us down with a game so much loved by this community!