Roll up, roll up, and welcome to the semi-final of the 12 Games of Christmas. Six games have already been brutally dispatched and now only 6 remain, ready to duke it out for the honour of the Game Debate community's favourite game to play over Christmas.

In the first set of rounds Assassin's Creed Unity scored a surprising and yet narrow victory of Watch Dogs, putting Aiden Pearce in his place with a well-timed Phantom Blade. Shadow of Mordor meanwhile absolutely stomped over Dark Souls 2 in what has been one of the standout victories of the tournament. Now though, these giants must battle each other for a coveted spot in the 3 way final. Will it be the young Padawan that is Shadow of Mordor, or the wise old master that is Assassin's Creed Unity? You decide.

The first round is over, the six battles from round one are 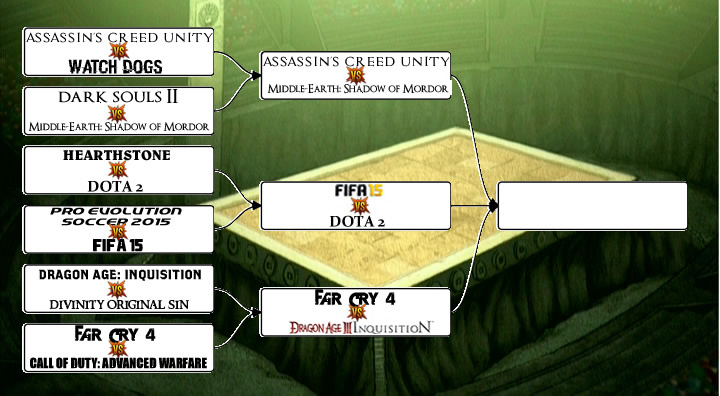 Which game is best?

This vote is kinda' pointless.Why? I can run SoM on high with 40fps while it looks awsome , whereas i can't run unity even on lowest settings at 1080p.

really with that rig and all the latest patches? damn.. 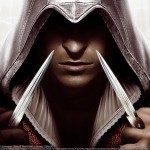 Well even though im a huge AC fan and the AC games are my favourite i just can't lie! Shadow of Mordor was way better than Unity hands down! :)

ofc it got blowed away by SoM !

I think they tried to compare games that play similarly.
Far Cry 4 and Cod were both popular first person shooters, ACU and Shadows of Mordor were both intense sword combat games, and.. I don't know about Fifa and Dota xD

Even though Unity faces a ton of bugs, glitches and optimization issues, I voted Unity because the game is still awesome. :D

Shadow of Mordor definetely! Assassin's Creed games becoming real ** each year and i'm pretty sure the next one taking place in Victorian England will be crap once again.....

hmm perhaps I might try Shadow of Mordor seeing how much votes it earns :)

You definately should man! Get it ASAP! :D

btw, i luv this game and it has been my wallpaper for over a month

Although i know theres a rational reason for all the mntioned things, but i personally feel that the game might also have been better if there were:
-> More things to do (Excpt Combat)
-> More challenge (one could easily kill 100 enemies)

The game probably has the besssttt combat in any of the games released in 2014
The graphics are also one of the best
The Optimization is matchless by far.
The Dialogue is great.
Th violence is eminent.

I am going with SoM;)
I didn't even played ACU due to it's requirement:/

Undoubtedly, Shadow of Mordor. I wouldn't be surprised if it went on to win the tournament, altogether. :)

Franchises versus new IP, new IP always wins (well not exactly new IP but it's a new concept versus the yearly release of Assassin's creed)

Look man i love AC as much as you do. I'm a big fan of it but Shadow of Mordor is something new, something fresh while Unity still has optimisation problems in this very moment. So just deal with it! Maybe the next AC game will be the blockbuster that we all wait for! :)

i am probably the only one who found nothing special about both of those 2 games. well maybe the good visuals of unity and the nemesis system of shadow of mordor. other than that i found both games pretty boring. started them both, finished non of them. such a waste of my money :/

It was a really... REALLY easy decision and i voted for SOM...

If ACU was released 'finished', would you have voted for it??

Speaking for myself, I wouldn't have, I grew tired of the franchise after Brotherhood really, I only bought the 4th game due to a certain admin on the site making it sound like the second coming x) (Thoroughly enjoyed it though so no complaints here)

But how can you judge Unity if you haven't even played it?!
Who knows, maybe you would've enjoyed it alot.

I would have voted it.

I wouldn't have even paid for it.

Ubisoft was an awesome company once.. they released great games but they should stop this yearly release it will be better :)
I love to play GRP it's so good

I really hate their allegiance with one graphics processing company screwing things for many others.

well that escalated quickly x)
@Assasinshome4 I didn't exactly "judge" it, what I mean is, we've been playing Assassin's Creed 2 with some tweaks for like 5 years now x), I personally think the franchise should have ended with 3, I realize that it is worth way too much money for it to simply disappear, it's the same reason I haven't bought BF4, nor will I buy Hardline its simply tired. (A slightly hypocritical comment based on the fact that I LOVE MGS and the series has basically been the same since the 2nd as far as mechanics go... but ya know KOJIMA TOO STRONK :P)
If you enjoy those games that's fine, and I totally respect that, they are there for the reason that many do.

The polls look like a graph depicting the average frame rate gamers can expect in each of those games. lol