One of the world’s rarest Nintendo NES games has started a bidding frenzy on eBay. The mint, unopened copy of Stadium Events is highly sought after item on the system, and with plenty of time to go it’s already hit north of $99,000.

Stadium Events was developed by Bandai and featured a special floor that players could jump on to trigger buttons, in a similar manner to arcade games such as Dance Dance Revolution. Bandai developed the aforementioned Family Fun Fitness Pad, but Nintendo bought it up almost immediately after launch and renamed it the Power Pad. To prevent customer confusion, Nintendo renamed the new package World Class Track Meet, meaning there were only 2000 copies of the original Stadium Events game ever made. As it stands there are thought to be very few still in existing, with many presumably consigned to the trash bin.

The Stadium Events cartridge dates back to 1987 and is playable on the NES (Nintendo Entertainment System). Bidding began at $5,000 on January 5th, but the auction war has seen it rise to nearly $100,000. Perhaps most bizarrely, whoever buys this is hugely unlikely to even play it, not helped by the fact that it’s been sent to the Video Game Authority in Roswell and “sealed in a professional quality acrylic case where it will remain for the rest of its life.” 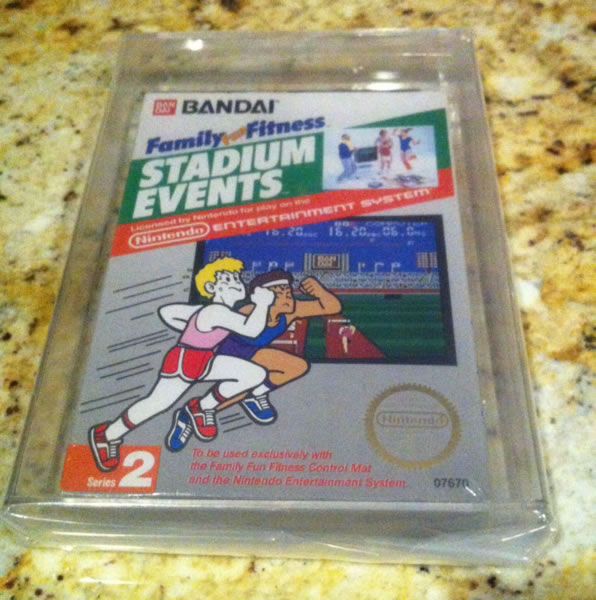 The eBay auction is set to continue for another four days, so this cartridge could reach stratospheric prices in the meantime. You can check out the auction here and, if you’ve got vastly more money than sense, you can get your bid in!

Or, you could just download the ROM for free. :/

This is so irrelevant my brain BSODed

Or and Arab sheik... No seriously, those guys spend their money as if there is no tomorrow...

He he , some people just like spending their money in different ways :D

but they don´t buy it as a "game" they buy it to collect, and maybe reseel it later for even more.