Telltale Games announced today that the next episode in it's much anticipated 'The Walking Dead' series is hitting consoles this Friday, June 29th. The game, which is an adaptation of the hit TV show, which is an adaptation of the hit comic books of the same name, has developed a cult-following and fans seem eager to know what consequences their decisions will bring in The Walking Dead Episode 2.

A heavily story-driven game, we are informed that choices made during episode 1 will have direct consequences during the episode 2 and may possibly continue to influence your game up to the finale in episode 5, due out later this year...

“Your decisions or actions might have an effect in the episode you’re playing or might affect the entire season. You could answer a question in a certain way and have a character become suspicious of your motives, or you could be forced to choose who to save when two people are in mortal peril but only one can be yanked back from the zombie horde. Your decisions will stay with you throughout the series, and their repercussions could mean that you and a friend have a very different game experience,” Telltale Games mentioned in an eariler Playstation Blog.

The acclaimed game series is supposedly split into five episodes, each of which will cost you $4.99 on all platforms. If you were convinced after playing The Walking Dead and want to get all of them, you can buy the entire series for a meagre $19.99, in the end saving you an eventual $5. A treat; if you consider the quailty of the previous game and this one(from the demo) alike.

So, all you Xbox fans can get this game today whereas the PS3 and PC gamers will have to wait until Friday to experience this gem of a game.

Have you played The Walking Dead? Excited for the Episode 2? Or are there other games keeping you worthwhile? Starting sharing below.

I liked it's prequel,definitely going to try this one :)

Same here. They say that this one blows the sequel out of the water :p

Glad to hear that :D 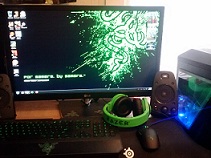 whats the arrrr about

They must be pirates :D

That's what I was thinking lol

Lol, don't take me seriously on that. I was just playing along :) Avoid P.