The long-rumoured next game in the Tony Hawk series will be Tony Hawk's Pro Skater 5, as revealed by an early shot of a promo event for the game. Chef Joe Youkhan uploaded the shot to Instagram, while he was catering at the event for the latest Tony Hawk’s Pro Skater game.

In the picture you can see the Tony Hawk 5 logo in the background on a projector, with the name suggesting we could be seeing a back-to-basics approach from the Tony Hawk’s Pro Skater series. 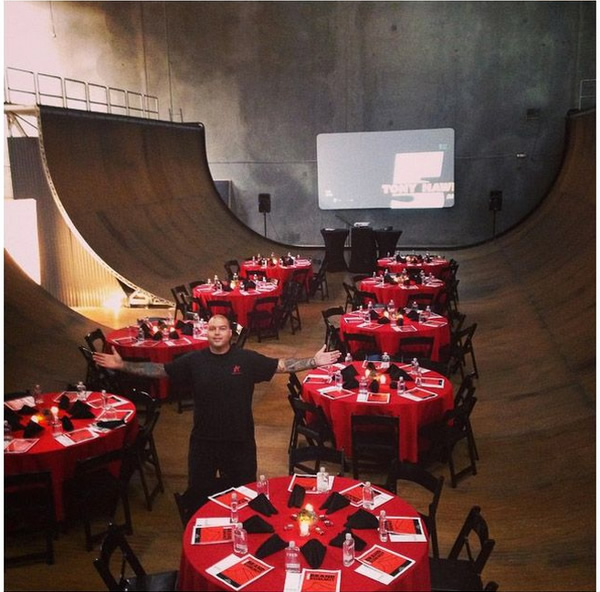 The Tony Hawk series began getting more gimmicky throughout its lifespan, dropping the two minute timed high-score runs and even allowing players to wander around on foot. Interest in the series waned a few years back, but this numbered sequel appears as if it’ll be going back to the roots.

Publisher Activision has remained tight-lipped about what the future holds for the series, with the last proper outing being the motion-controlled Tony Hawk: Shred in 2010, which went down like a lead skateboard. So far the only clues have come from the Birdman himself, with Tony Hawk revealing at CES 2015 that a gamer was on the works on PlayStation 4.

We don’t know what platforms it’ll be coming to yet, other than Sony’s console, but we’re hopefully Activision will follow the cash and also launch it on PC and Xbox One.

If it comes to pc then Day One Buy for me. Mainly for Two reasons, 1) Nostalgia as a child playing PlayStation1 and 2) The thirst for another skateboarding game

I know the game is supposed to be wacky but i really hope the next installment will be realistic like the skate series. I hope they make skate 4 :/ best skateboard series ever!

Yeah, you're right! :D i'll leave the realism upto the skate franchise and powerline grinding up to tony hawk ;)

it was about time for this game i was playing 1,2,3 about tony hawk 4 dont know much but looking forward for this one

I remember playing this game years ago. It was pretty cool.

You're from the future or what? :D

why was this downvoted