We’ll be getting a world first trailer of Star Wars Battlefront tomorrow, but ahead of the reveal at this week’s Star Wars Celebration in Aneheim, California, backstage photos have leaked out of posters for DICE's multiplayer shooter.

The official Star Wars Battlefront poster depicts a number of Star Wars favourites, including AT-ATs and an AT-ST. Most intriguingly though, the appearance of TIE Fighters, X-Wings, and even Star Destroyers suggests epic space battles could be on the cards, rather than just land-based wars.

The image, posted on Reddit, indicates we could be seeing huge air-to-land battles featuring a number of iconic Star Wars vehicles. While the lava-filled locale is unclear, it looks as if it may be possibly be Mustafar, from Star Wars: Episode III, or something to that effect. 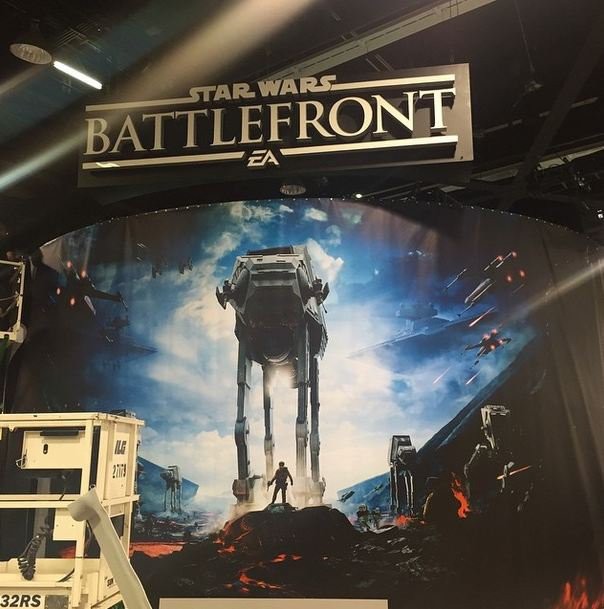 If you look carefully at the top-right of the image you can see an Imperial Star Destroyer emerging through the clouds, with a trio of TIE Fighters hiding in the top-left.

All in all in looks like Star Wars Battlefront could be hitting all the right spots, focusing on the most-loved aspects of Star Wars. Whatever the case we’ll find out tomorrow, when a live event will be streaming on the official Star Wars website from 18:30 BST. The event won’t just be limited to DICE’s Battlefront even, we’ll also be treated to a brand-new Star Wars: Episode VII - The Force Awakens Trailer.

Do you think we'll be seeing true space-based battles? Or will Star Wars Battlefront stick to the terrestrial combat that's served Battlefield so well?

Now heres the question, will the space battles look better than star citizen's ?

I mean star citizen is imo the best looking game out right now.

That's a tall order.... and really it is a bit unnecessary, as long as the game is fun to play and lives up to the legacy of its predecessors, who cares if the game doesn't look like the absolute best on the market as far as graphics go. I'm sure it will still look phenomenal!

No it's an "order" on my part, I'm just posing it as an interesting question considering the level of graphics we've seen in the early footage. :)

I really, really hope Dice have learnt from the BF4 fiasco, but I just don't think they have. Please, please prove me wrong on launch day....

I hope so too.. but I am not expecting them to learn.. xD
All we can do is cross our fingers and hope for the best...

Your suppose to travel from land to space in one seamless operation without any loading time thats the rumors i heard about it a few months ago.

I had no idea that spacebattles being not included was ever an option for this game!
If it turns out it won't have them I don't think I will be interested in this game. The space battles were half the fun in battlefront II.

Agreed!It just wouldn't be the same without the space battles.For this game,it is a must.

Yeah, if it wasn't I'd be disappointed