SimCity-usurping city builder Cities: Skylines will finally get a chance to have some shut eye later this year. The first expansion for Colossal Order’s management game is After Dark, and it’s all about managing what happens in your city once the sun goes down. Here in Bristol that usually means riot vans, pop-up urinals and twinkling kebab shops as far as the eye can see, but we’re sure Cities: Skylines - After Dark will have a little more panache.

Players will have all sorts of new buildings, zone types and laws to control the nightlife. The cops will be on their toes so there’ll be improved police departments with stronger forces at night, updated leisure zones, beachfront bars and properties, restaurants, theatres, clubs and more.

"It's not just a visual feature," said Mariina Hallikainen, CEO of Colossal Order, at Gamescom. "It affects the simulation — because we all know people behave a little different at day and night."

"Will you construct a bustling city that lives and breathes at night or will your city succumb to the perils and misadventures of night life?" asks the Cities: Skylines After Dark trailer.

I can't wait for this! The game as it is already, with a healthy modding community, is simply fantastic. Being a SimCity veteran, there are some aspects and functions that I miss, but it is a much better experience. Having a day/night cycle is all that this genre was missing! 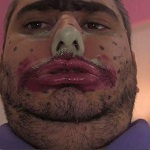