We’ve finally got our hands on some of the first gameplay footage of Cliff Bleszinki’s LawBreakers. As you’d expect from one of the lead designers of Unreal Tournament, LawBreakers is a sci-themed arena shooter, albeit team-based and with player classes.

CliffyB’s Boss Key Productions has been teasing the shooter all week, which is set in 2105 following an apocalyptic event which destroyed the moon. During the ensuing chaos criminal gangs rise up, and it’s to the strong arm of the law to put them back in their place during 5v5 online action. On first impressions it’s the return of fast-paced, gib-spewing, rocket-jumping arena shooting.

The gameplay reveal of LawBreakers shows off the Grand Canyon map, along with a number of the free-to-play title’s unique classes. These include the nimble assassin Kitsune, wielding dual blades and a plasma grappling hook, and gunner Breacher, who erm, guns everything down. There’s also Maverick the skirmisher, who oddly seems to like avoiding skirmishes using a jet-pack, but can make use of thermal goggles to spot enemies from afar. Last but not least is Cronos the titan, who’s basically a hulking great bloke who loves a dainty rocket jump in between crushing skulls.

It's one of the most generic shooters I've ever laid eyes on but damn if it doesn't look fun. Between this, Battleborn and Overwatch, it's set to be a packed year for class-based shooters next year.

LawBreakers is coming to PC in 2016. No word on a console version just yet.

Am I the only one who thinks it DOESN'T look like CoD?

is this game going to be on steam? 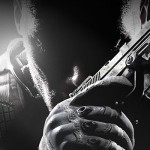 so whats the point of making the same game ... didnt like the idea ( personal opinion )

i think game developers are out of stories all they are making now is a sequal to an older game, remastering / remaking an older game , more MOBA , more skirmish games like this one with no goal oe a story ...what is going on here ?