There's been plenty going on behind the scenes here at GD, with one of these being GD's own Memory and Shader Performance Meters. Here I'm going to run through what they are, how they work, and how they're going to benefit your PC gaming experience.

The difference between these two manufacturers has been increasing over the years and will continue to do so. AMD has been putting all its money into graphics cards with superior memory configurations, to boost image improving techniques and support higher gaming resolutions, at the cost of greater power consumption. NVIDIA has been continuously redesigning its GPU shaders, making them both more powerful and energy efficient.

A graphics card's overall performance is only as good as the GPU itself. So having a very large frame buffer or a very large memory channel is useless if the GPU is not up to the task. This is one of the main reasons why AMD's Radeon R9 Fury X, equipped with HBM Memory and delivering 512GB/s of Memory Bandwidth, is slower than NVIDIA's GeForce GTX 980 Ti at anything below 4K.

Below are two good examples of what this means: 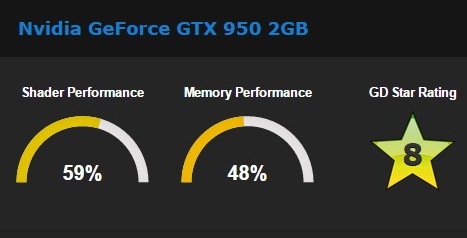 The Radeon R7 370 having better Memory Performance basically means that as the resolution increases, performance decreases at a lesser rate than the GeForce GTX 950, although this doesn't necessarily mean the Radeon R7 370 is faster at 4K.

We couldn't exclude this example. Obviously 2009's GeForce GTX 295 has an ageing architecture and doesn't benefit from all the driver updates that the GeForce GTX 660 still does, but it's clear the GeForce GTX 295's 50% superior Memory Bandwidth proves useless in most of today's gaming scenarios because of its weak Shader Performance. Let's take a look at the Resolution Performance Scores: 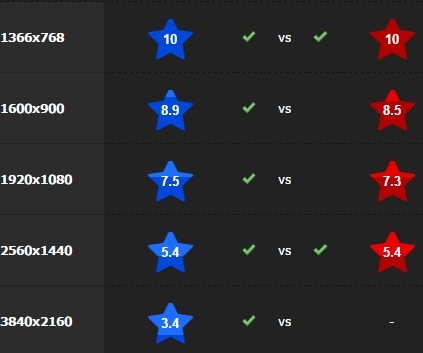 Does Your Graphics Card Have Better Memory or Shader Performance?

please add the same kind of feature for cpu's! that would be awesome

You guys are amazing for doing this :D please extend this to your CPUs as well!

Well, I'm quite content with my 280x, never let me down so far, my friend has got a 970 and my card outperforms some titles, whilst his does better on some other.

I am sorry buddy but I can't think of any game in which Radeon R9 280X would beat GeForce GTX 970. Care to give an example?

It might be possible that his friend's CPU holds the 970 back significantly.

Fun Fact: The "Its Equivalent" Choice in the poll being the most voted option so far means most of our dear GD Members (or at least those that voted) have a High-End Graphics Card. Something above GeForce GXT 770, like GeForce GTX 780, Radeon R9 290X, Radeon R9 390, GeForce GTX 970, etc.

Pip, can I get your fearless forecast for the next generation(s) of GPUs? Would Nvidia/AMD be working more towards making 4K mainstream (memory) or further improving 1080p gaming (shader)? I would rather it be the latter; but technology like HBM seems to point to the former. Or maybe just a good balance of both?

I think perhaps AMD is aiming for the 3K, 4K Market. That's why they are focusing on HBM Graphics Cards.
I would say most of the gamers out there game at 1080p and bellow and currently NVIDIA dominates that market. Their GPUs are very efficient and offer good shader performance. Of course some of them are bottlenecked by the memory. For example GeForce 840M could pull out 900p gaming, were its bus-width of 128-bit, instead of 64-bit.
AMD needs to move on to a newer and more powerful architecture. Perhaps a smaller manufacturing process will allow that. Currently their graphics cards offer an enormous amount of shaders which are not really all that powerful or efficient. The problem lies there.

Does any of your graphic cards have future proof? I hate the fact that I switch graphic cards every 2 years just because of lower fps. Since 4k display is already been develop. What graphic cards should I bought? Single or SLI/Crossfire?

But mine is not high-end, but still equivalent :) is that means, that it WAS high-end when it came out?

No, yours is just balanced lol

"Having a very large frame buffer or a very large memory channel is useless if the GPU is not up to the task" That's the smartest thing I've ever heard. In terms of gaming, 12gb vram on the Titan is absurd and even the 8gb on the 390 is too much (aside from Shadow of Mordor i suppose)

I've personally run out of VRAM working with Photoshop (with other programs open) on a 3GB GTX 780, and I won't even talk about my 3D scenes, so if not for gaming - I'll take a load of memory just for work!

Absolutely, if it comes down to work, then more VRAM is certainly welcome! But in terms of just gaming not much is needed yet :) 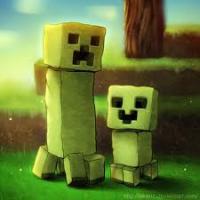 88% on Shader and 52% on Memory here.
Why don't you guys include a after-overclock meter?
My 52% on Memory will be around 60% if a percentage including the overclocks is implemented.

Well GD cld always allow users to specify the overclock separately for clock/mem.
There is obvioisly still work to be done though coz even the current general overclock feature is not working (it overestimates the benefit of the overclock)

It would be like this- The user feeds it's overclocks to GD. GD has a pre-programmed calculator to calculate approximated performance increase in percentage.