On the site recently we had an interview with James Swallow, one of the lead writers on Deus Ex: Mankind Divided and Auroch Digital’s Dark Future: Blood Red States. We’ve had a look at what we could information we could glean about Mankind Divided, but he also had plenty to say about Auroch’s post-apocalyptic tactical driving game set in the scorched earth of the American wastelands.

Based on the Dark Future tabletop board game from Games Workshop, Blood Red States is all about surviving in the badlands of America. A combination of tactical gameplay and systemic missions ensures practically guaranteed gameplay depths, but behind the scenes James Swallow is given the assignment of tying it all together with a twisting plot. 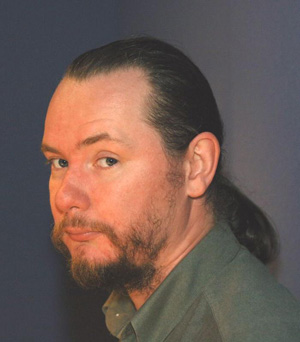 Jon: So, Dark Future isn't your typical Mad Max clone, or Fallout. What would you say your guiding principles are for writing in that world?

James: Tonally Dark Future has a little bit of all these things. It's a little bit Mad Max, a little bit of that post-apocalyptic Fallout vibe, but I think it has a unique fusion of all these different elements. There is a nihilistic, darkly funny aspect to it. That's what makes it cool, along with cool cars and the visceral nature of high-octane action adventure, as well as a layer of very British overtones. This strange idea we have of observing American pop culture through a lens that is slightly removed from the actual American experience. I think that lends a weird flavour to it that makes it unique. It's the same sort of thing as Judge Dredd. That's a comic book wholly created in the UK but it's about this idea of a hyper-realised American sci-fi future, and I think Dark Future comes from a similar place.

Jon: How do you expect it to be perceived in the US?

James: I've never really thought about that. I think there's a flavour for it. Judge Dredd does pretty well over, and another good example of a British-eye-view on American pop culture is Grand Theft Auto. I think it'll be interesting to see how they accept it.

Jon: Will you be adopting a dark style for Dark Future?

James: Well naturally, Dark Future is quite nihilistic anyway, so that's already baked straight in. The thing about Dark Future is it's a very uniquely British, darkly comic, faintly satirical, comedic style, but also a bit twisted. All that kind of stuff is in the DNA of Dark Future, which I think speaks nicely to my style of storytelling. It's a fun world to be part of. I've already written a novel for it, Jade Dragon, back in 2006.

Because the Dark Future world is very much a throwback to the 80s, it has a pleasingly retro style to it even though it's set in the future. When I did Jade Dragon that was my love poem to 80’s cyberpunk novels and all my favourite Hong Kong action movies all rolled into one. 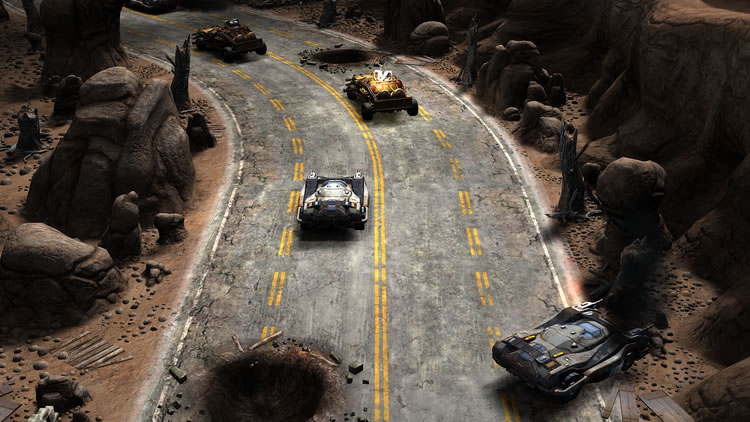 No I haven't actually.

Jon: I was going to ask if you'd attempted to stay away from it.

James: I think consciously I would try to avoid watching something like that. Now we're deep into Dark Future I think I should make an effort to watch Mad Max Fury Road, just to make sure we don't end up down the same track.

Jon: Onto Dark Future: Blood Red States itself then, and your role in helping Auroch Digital bring this world to life. Would it be best to describe you as the glue between Auroch and Games Workshop, helping the developers and the IP reach the correct balance of development vision and IP continuity, or is that entirely irrelevant to your task in writing a great story?

James: I guess the role I'm fulfilling right now is I'm narrative consultant. I'm being brought in because I've got experience with the Dark Future fictional world, and also my experience with Games Workshop doesn't hurt. I'm already part of the team over there (GW) so that smoothed things along a bit. I guess the Games Workshop guys look at me and trusted me because I've already done stuff for them. It's not like I'm a complete new guy, they've worked with me before and they know the kind of writer that I am.

The other skillset I bring to Blood Red States is I'm familiar with doing a Dark Future type story. I mean that with a little 'd' and a little 'f' rather than the franchise as a whole. I've written for cyberpunk universes like Deus Ex and Judge Dredd. All those tonally have similarities to the Dark Future world. It's a milieu I feel comfortable in writing. So I guess the role I've been filling is to make the tone work. Working with Thomas (Rawlings, head of Auroch Digital) and the guys at Auroch to translate that fictional world and layer it onto a compelling and exciting game engine to make the two things work in sync. Because often you'll see a licensed tie-in for a game and it feels like here is a game we had that we'd just slap a paint job over. To me that's where licensed games fail.

The Auroch guys are definitely interested in making sure the game reflects the world and the world reflects the game. That's when you get a good licensed tie-in, because it feels like the two things are connected as opposed to just rammed together in the hope of getting an entertaining experience.

Jon: How do you balance appealing to hardcore Dark Future fans and franchise newcomers?

James: Earlier I was talking about tone. Striving to get the Dark Future tone. That ephemeral nature of what makes this IP what it is. That's how we appeal to Dark Future fans. You like Dark Future, we're going to deliver that to you. We're not just going to give you something with just the name stuck on it. This is going to feel like Dark Future. That is definitely something that marbles the entire production. We've got Jon French over from Games Workshop, who himself is a writer. We jokingly say Jon is the fun police to make sure we don't do anything too crazy. But the truth is, he hasn't really had to say no to anything because we're all on the same page, we all understand what makes Dark Future what it is.

Jon: And appealing to a wider audience?

James: I guess it’s just all about creating a fun experience for what will be a cool game. It’s certainly going to be a little bit different from the rest of the stuff that’s out there. Tomas talks about it as the fusion of Burnout and XCOM, and I really like that idea. I think that's a great elevator pitch for what it is. It’s got a fun, compelling gameplay loop that will be enjoyable, along with a cool background story. That kind of nihilistic, darkly funny kind of thing that makes Dark Future what it is - I think that will be appealing to people who perhaps aren't familiar with the board game. 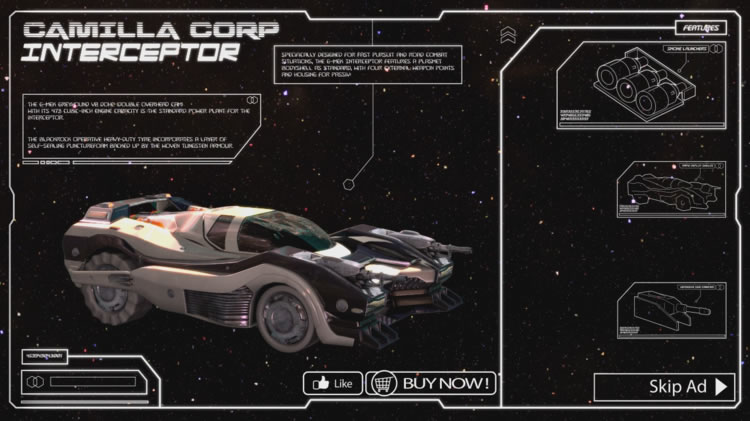 Jon: Now that Auroch's got the basic game up and running, has that informed any changes you've made to the script?

James: Not really because we've been working in tandem all the way through. What it does for me personally is it energises me and enthuses me because it's gone from being just a collection of conversations and bits of paper with stuff written down, to becoming an actual game. Instead of guys just sitting in front of computers writing code, you to get to see people creating stuff which looks like what you'll see in a videogame. And that's always the exciting part of the project because it feels like it becomes real. You're starting to see the first embryonic elements of what the final game will be, and I find that very exciting.

At the beginning we had a rough story arc for the kind of narrative we wanted to tell, and that's evolved over the past few months. Since then we've structured a compelling three act story for our antagonist and the supporting characters, with some original story elements and some classic Dark Future world elements, all meshed together. I think we've got a really cool idea here, it feels like it's starting to come together.

Jon: When you say three acts, is that three acts in a single game?

James: I think the idea is the complete game is going to be a three act story structure. So your classic feature film structure.

James: We've just been talking about that actually. I always enjoy games where I feel like I have an impact on the world. Often a lot of games it's quite linear and when you do make choices it's whether you shoot this guy or don't shoot this guy, quite binary. We've been talking about ways we can offer the player lots of choices, and I think one of the things we want to implement is, as you move through the game you'll be presented with conflicting opportunities. Perhaps a mission will say there's a bad guy over here, go and find him and deal with him. But you may have someone else saying, “Could you just let him get away and we'll pay you some money?”, while someone else says "This guy killed my brother and I want revenge. I want you to grind him into the asphalt." Then someone else might say “Just pretend you kill him and actually do this other thing.” 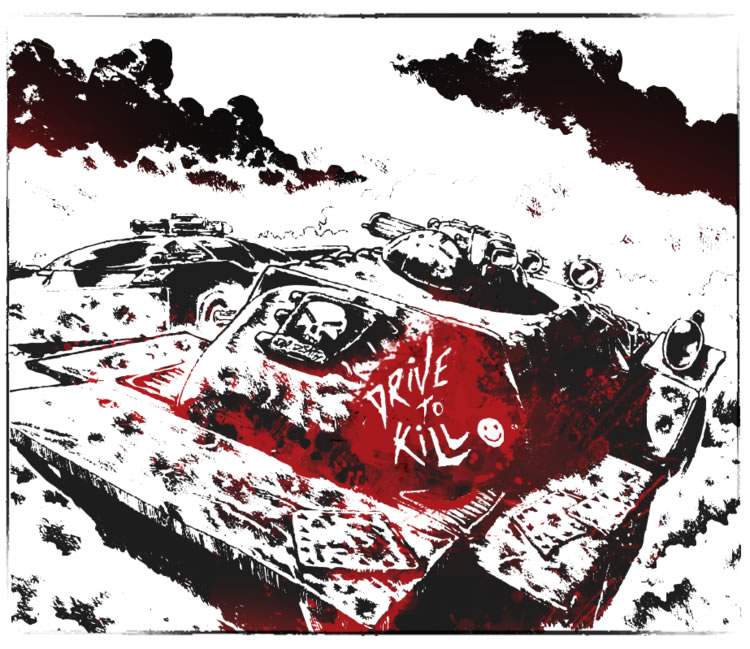 Having all these different opportunities will allow the player to pick the kind of person they want to be. You could go through Dark Future: Blood Red States as an avenger of justice, or a corporate mercenary attempting to make as much money possible. Hopefully we can create a system whereby as you play through the game those choices you make will be reflected in the world. You'll hear radio transmissions or come across characters that will react to way you have played through the game. To me that feels fulfilling. Too many games it feels like the world of the game is wallpaper that cruises by, it doesn't have any direct reflection of what you do. I think it's much more fulfilling to know that when you've blown up a bad guy's car and you roll into town they'll know you as that badass that did that cool thing. You feel like what you've done has some sort of meaning.

Jon: Would you say in it’s systemic choices it’s like The Banner Saga?

James: That's an interesting comparison actually. Banner Saga's a brilliant game. Quite bleak, but really strong. I think on some level there are some similarities with the characterisation on it. Structurally there's probably some similarities to Banner Saga, but tonally Dark Future is very, very different.

For more on Dark Future: Blood Red States be sure to check out our preview, and we'll be sure to bring you more details as and when we hear them.

wow, that racing game, that's what i always wanted, something that feels like psx's red ashpalt - rock n roll racing