Never ones to shy away from rooting around in their back catalogue, Tim Schafer and his cohorts at Double Fine Games have been busy dusting off Day of the Tentacle to present the masses. A remaster of the 1993 sequel to Ron Gilbert’s Maniac Mansion (which incidentally is hidden away in its entirety in Day of the Tentacle), Double Fine has announced it will hitting PC and PS4 this month.

If you’ve seen or played the original then you’ll be aware it’s ages somewhat. Day of the Tentacle Remastered has been given a spot and polish for our disparaging millennial eyes, with redrawn artwork designed to take advantage of them there swanky HD monitors you’re currently gawping at.

If you’ve yet to witness this maniacal time-travelling adventure game then it concerns a group of friends to looking stop an evil Purple Tentacle from taking over the world. As you do. Playing as all three and exploring different periods in history, it doesn’t take much to comprehend the warped chain of puzzles which awaits.

The system requirements have also been released, and as expected there's a pretty low bar to hit the minimum. Considering the age of the game and how basic it looks though, we thought Day of the Tentacle Remastered would demand even less. A GeForce GTX 460 or Radeon HD 6850 seems a little brute-forced for rendering static backgrounds and a few character sprites. Regardless, you can check them out below and head on over to Day of the Tentacle's game page to see how your rig stacks up.

Anybody planning on picking up this adventure classic on March 22nd? 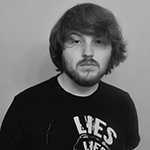 Well, I expected this to be a completely different type of game...

I had no idea this was happening! Fantastic!
This is going to be more fun than a jumpsuit full of monkeys!

holy crap, you don't believe how relieved i am right now

Is that patrick in the background?

I think so xD