Total War: Warhammer has become the latest big hitter to join the limited list of titles supporting DirectX 12 right out of the gate. Worked on in collaboration with AMD, which hopefully signals top notch performance on Radeon graphics cards, Total War: Warhammer will be engineered to support up to 10,000 characters on--screen at once.

It’s also joined by Rebellion’s Battlezone, a reimagining of the tank battling classic, geared towards VR. With Rebellion on board it does also open up the possibility that the recently announced Sniper Elite 4 could be the next in line. 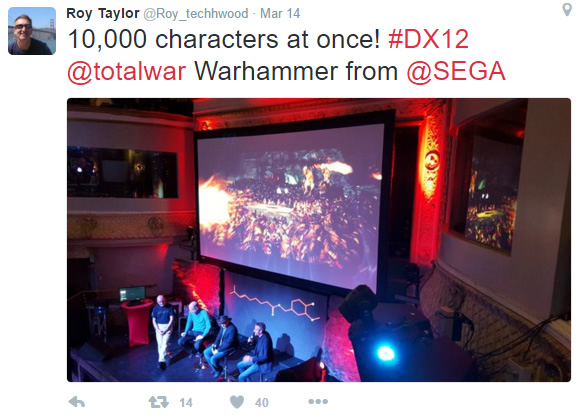 While our recent benchmarks for DirectX 12 has proven fairly inconclusive of its capabilities, on paper Total War: Warhammer is the perfect fit. A CPU-limited series by its very nature, DX12 can work by offloading processor tasks to your GPU.

“DirectX 12 is poised to dramatically improve the PC gaming experience and Radeon’s architecture is engineered to be the leader for this API transition, thanks to unique hardware features like ACE (Asynchronous Compute Engine), which improves GPU utilization, input latency, efficiency and performance," said AMD during the announcement.

"The potential competitive advantage of AMD with DirectX 12 will continue to grow in importance, as most major game engine developers have made or are making the switch to DirectX 12, including EA/DICE with the Frostbite engine and Oxide with the Nitrous engine.”

If any game is going to take advantage of DX12 it's Total Warhammer, so we're itching to see just how it stacks up in some benchmarks when it arrives on May 24th.

I got an Nvidia just for TW alone - as all their previous titles were mostly supported for Nvidia and AMD always seemed to lagg behind on the schedule.

However, just as J03Z95 describes below.. battles of up to 10k units on the battlefield is but old news for a TW title.

10,000 characters sounds good, in DX12 as well, great. But this is something that has already been possible in Total War games before. Right back in the original Rome Total War battles with tens of thousands of troops was possible. Yes these 10,000 characters in Warhammer will individually look amazing but a truly outstanding development would be battles with 100,000+ soldiers. Don't get me wrong the upgrade to DX12 is great and a step in the right direction for Total War alongside Warhammer being developed as a 64 bit game. But if those 10,000 faces look like this again, CA won't be forgiven.

There will probabely be mods to increase how many groups of soldier you can put in your army. i used one a long time ago in rome 2 and my battles were so laggy because my hardware was poor then. there also may be one to increase platoon siz

Since CA doesn't have the licence it propably means that steam workshop won't be available anf that the only way to get mods will be from twcenter which kinda sucks .

sounds like a good idea but let's consider the fact that every dx12 game so far has been utterly broken.

If DX12 does indeed reduce performance , which it does on NVIDIA cards atleast , you can always revert back to DX11 no problem .

Depends on the title. For hitman at least mvidia and amd both gained depending on the card. Ashes was the same gtx 970 gained 50%. TR is a wash for both sides amd and nvidia are mixed. Other games both gain in higher end cards.

I think implementing DX12 in Total War is fantastic since it can take off load from the cpu and load it to the gpu which is what total war mostly relies on .