BioShock: The Collection Surfaces For PC, PS4 And Xbox One

It’s been rumoured for what seems like forever now, but at long last it looks as if BioShock: The Collection has surfaced. It seems a no brainer for 2K to package up the BioShock series and re-release it, and according to a Taiwanese game rating website just such a title has been passed through for certification.

The leak is also joined by a cover art image which all but confirms the package, as well as strongly indicating it includes the original BioShock, Bioshock 2 and the at first revered, but now much maligned BioShock Infinite. That’s a whole lot of BioShock in one place. I did have this pegged as a console-only release but BioShock: The Collection is also coming to PC. 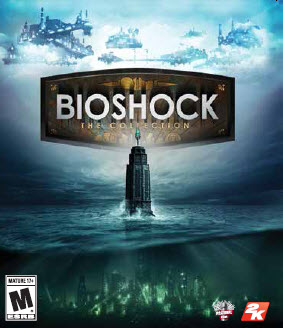 As for what the collection contains, it’s presumably going to be remastered versions of the originals, at least on console. The original has probably aged a little so expect a bit of 1080p / 60FPS spit and polish. In fact, the original is now somehow nine years old. It's practically a gaming relic.

In terms of the PC version of BioShock: The Collection, it would be nice if it contained any new visual flourishes but I wouldn’t expect any more than a bundling of the games as they are, potentially with all the DLC included. BioShock Infinite in particular still looks great with a capable rig anyway.

2K still hasn't come out and announced the collection as of the time of writing, only saying "doesn't respond to rumours or speculation". Sorry 2K, but I think the Big Daddy's well and truly out of the bag already.

BioShock: The Collection then, anybody planning to pick this up on console or PC? What would the PC version need to include to tempt you in? Let us know!

Since when Bioshock Infinite is maligned wtf?

I wondered the same...

Infinite was one of the very, very few video games that moved me to tears in many scenes. Movies don't even to that to me. It was a real emotional ride, regardless of how repetitive the gameplay seemed at times (although I found it to be very fun as a FPS, as well).

I finished infinite, but I haven't played 1 or 2

The first one was fantastic! the second one did'nt really reinvent the wheel but was still fun nevertheless and Infinite well, was just as good if not better than the first one

The connection between the aquatic world and the flying world is epic, this lighthouse is a landmark in Bioshock, especially if you played 1 and then infinite

Of the three, Infinite was my favorite and I loved the first two. All three are great games and set in a crazy atmosphere.

Rapture and Columbia in one picture, i am speechless. They couldn't have made a better box.

I want it as a wallpaper

i have all 3 but i cant finish the 2nd due to the game crashing at the same spot every time:/ hope they at least update 1/2

I miss you Elizabeth