Gears Of War 4 Dated For Xbox One, Still No Word On PC Version

Just as Xbox One gamers have been getting stuck into Quantum Break since its launch yesterday, Microsoft has announced the release date for its next big Xbox One exclusive - Gears of War 4. The Coalition’s cover-based shooter will be coming to Xbox One worldwide on October 11th.

Fantastic news if you’re an Xbox One gamer, but in all likelihood it’s probably good news for PC gamers too. Every Xbox One exclusive released since Rise of the Tomb Raider has also eventually been announced for PC, so we’ve got high hopes the fourth outing will make the jump.

Faced with Gears of War 3 wrapping up the trilogy nicely with a bow on it, Mass Effect style, Gears 4 will in fact be set 25 years after the events of its predecessor. A new trio of characters are present for an apparently harrowing 24-hour journey, comprising Jack Bauer, JD Fenix, Kait Diaz and Del Walker. Expect alarming levels of testosterone and chainsaws where you wouldn’t believe.

We also got a peek at the official Gears of War 4 box art which is.... nice, I guess. It's definitely Gears of War I know that much. 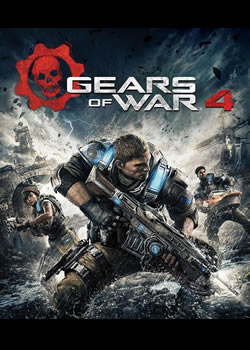 We'll keep you posted should we hear any more whatsoever about a PC port, but recent announcements have typically not been made until just a matter of months before launch.

Even if Gears Of War 4 is released on Win10, I'll still treat it as a console exclusive and avoid buying it just like it's predecessors, hehe. I survived many years without playing the GOW sequels anyway so why should this be any different?

If you're hoping for GOW 4 PC you're gonna be hoping for a very long time, just like Halo 5 PC!

I wish they release it on gog not steam.

Well, GOG is even better but Steam is good enough.

You do realize that GOG only sells games without DRM? Is that something you think Micro$oft would ever do?

Microsoft do or not to do,i love GOG.

It will only be released on the Windows Store, so it's a moot point. Many, like myself, will just not bother.
If they release it on Steam, it may be a different matter.

You can only keep on dreaming for that to happen cause you know it wont.

To be honest, with the recent releases on Windows store being nothing less than disasters means I don't really care. Gears of War on PC was bad and Quantum Break has been especially bad on Nvidia cards. Unless they release on Steam and fix their games before launch, I really hope windows store goes away like GFWL.

since it's going to be Windows Store exclusive, why even bother about it

I think until microsoft fixes the issues with windows store no pc gamer really cares what games they are going to release there, the best solution is to either fix their stuff or release on steam but i don't see it coming soon.