For those crying out for a new Battlefield 1 map, your prayers may be answered. Despite DICE categorically saying on Friday that Sinai Desert would be the only playable map in the open beta, the official Twitter account has now said DICE is taking player suggestions for a new map. 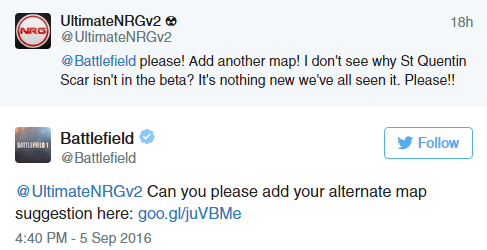 Right now I don’t really care about suggestions, just give me any. St. Quentin Scar seems the obvious one, seeing as the limited Battlefield 1 Alpha testers have already given it a play. If we were to get an entirely new one though there’s a choice of three other maps we currently know about.

Amiens is set in a French city and features British and German troops fighting for control in and around a train station. Monte Grappa is set in the Venetian alps and looks to heavily favour planes, while Empire’s Edge is set on the Adriatic coast and brings naval combat into play. All of them get a thumbs up from me, but you can make your case over on the Battlefield 1 forums where DICE is asking players to let them which map you want.

Ah, and here's the current Battlefield 1 map list. Which of these would you like to play in the beta? Anybody out there had enough of Sinai Desert?

Which BF1 map do you want?

What's even the point now? There's 3 hours until the 7th comes around, so there's pretty much just 1 day left of the beta, no point in even including an extra map this late... You won't even be able to learn the map effectively in a day.

Unless they extend it

I don't see the logic behind them extending it... Why confirm 8th the end of beta if they intend to extend it? Wishful thinking, that's all.. Not gonna happen, unfortunately.

Dice add one week with BF4 and the same happened with BFH so ...

They must be extending the open beta then? They can't release a new map this late on when it ends in 2 days time? It's pointless.

Usually they open another beta a week or so before releasing the game so they can spot bugs and errors before the big launch, probably will get a new map then.

any other map is more than welcome, noone wil complain about that

I must be the only one excited to play on Empire's Edge because of the naval combat?

You know nothing about history! French escaped to Argentina in Battle of Dundirk because they didn't want to fight against Vietnamese in Civil War!

No they can't. Because if they do they won't be able to sell DLCs.

they can sell us all dlcs they want then give us a map editor to add cumunity maps,

Kid, It's Battlefield, not Far Cry. You want an in game map editor so people can make crazy, stupid maps to use in a game that is set in the WW1 era?

I didn't vote because i have no idea about these maps. People who also played Alpha and saw St Quentin Scar would do better judgement.

I really liked St Quentin Scar and it would make sense for Dice to add it to the beta as we already played it during the alpha (so I guess it can be quickly added). I like Sinai desert but playing one map over and over gets boring.

Anything would be good honestly. Nice if the still might add a new map :)

Yeah, this desert one has grown on me, in particular in Rush mode, but I could do with something fresh to play. Although part of me wants to not get a new map as well, so it's all a bit more exciting at launch.