Destiny: Rise Of Iron Launch Trailer Has A Giant Flaming Axe To Grind

Having played and not been enamored with Destiny the week of its launch, I’m continually amazed to see just how popular it still is. The hype is rising this week for the launch of its second major expansion pack - Destiny: Rise of Iron. It’s dropping on September 20th, and in the meantime Bungie has released a launch trailer just to whet your appetite.

I have to admit it looks kind of cool. Especially that giant flaming axe. I want the flaming axe. Give it to me. Plus snow levels are always the best, as we all know. I’m sort of tempted to delve in once more and give it a go. Rise of Iron promises to included a brand new story campaign to play through, new weapons and armour sets, a new raid, and new and improved co-op Strikes.

In addition it sounds as if Bungie plans to go back to some of Destiny’s older raids like Vault of Glass and give players a new reason to play through them. “It’s always consistently been in the top 10 list”, said Rise of Iron director Christopher Barrett. “Since the second raid came out: ‘Hey, we want to go back and play older raids.’ The simple answer is it’s a matter of priority.”

Destiny: Rise of Iron is coming to PlayStation 4 and Xbox One on December 20th. It’s been two years since the base game’s arrival and still no word of a PC port. I’ve sort of given up hope for now, but surely PC must be a shoo-in for Destiny 2?

Any GD'ers hopping in for Rise of Iron? Still holding out hope for a PC port? Let us know!

Correction, Rise Of iron comes out this Tuesday (September 20th) :) 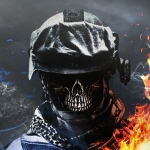 OFF Topic: The Crew is free on Uplay