If you haven't spotted the Gears of War 4 system requirements yet, then let it be said that it promises to be a very demanding beast. Luckily it looks as if The Coalition has absolutely heaps for PC players to tinker with in order to achieve their desire performance, comprising more than 30 individual advanced graphics options. Here we've got a run through of precisely how demanding each of the most important graphics option is in Gears of War 4 so you know what to tweak first in order to bump up your frame rate. 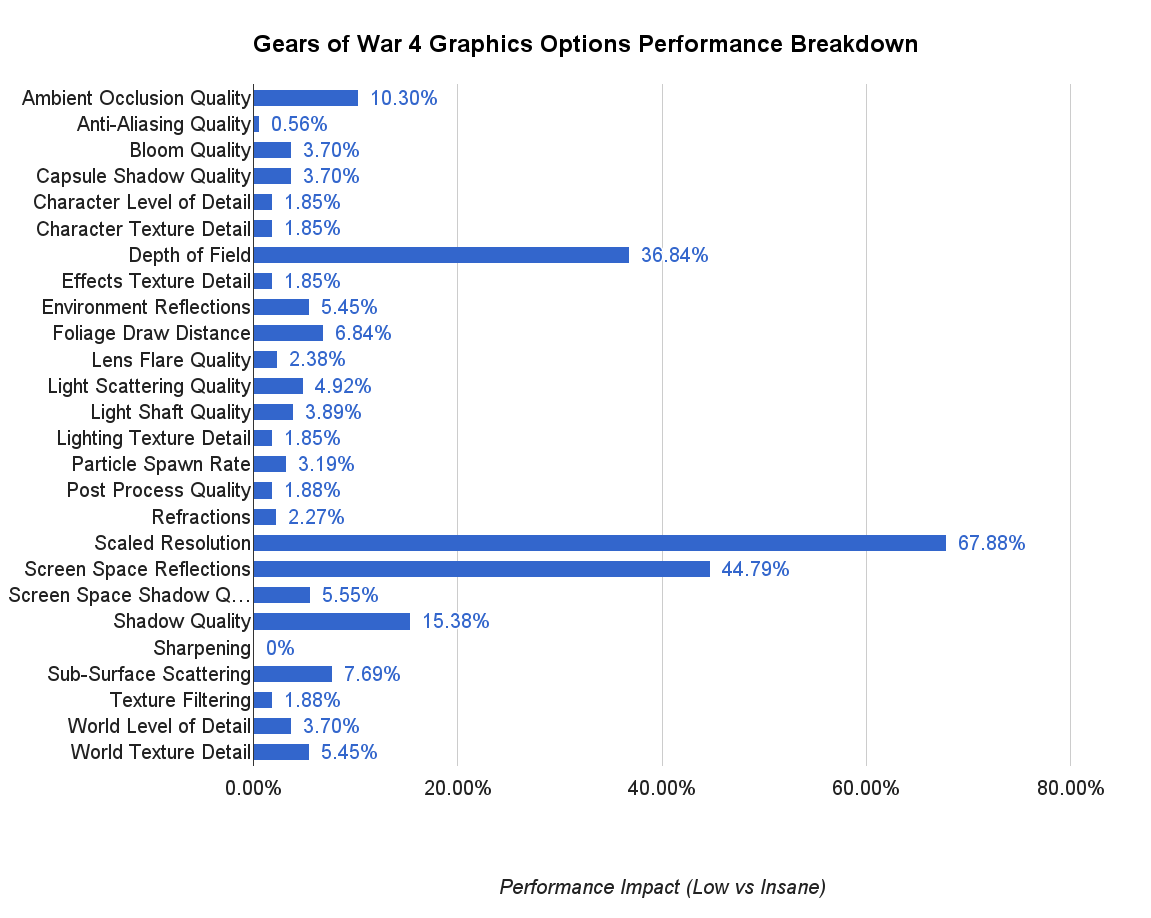 Of the graphics options which are available to tweak in Gears of War 4, Ambient Occlusion, Depth of Field, Scaled Resolution, Screen Space Reflections and Shadow Quality appear the main offenders. Everything else causes less than a 10% in FPS and shouldn't have too large an impact on your performance in Gears of War 4.

If you're trying to get higher frame rates in Gears of War 4 then anything with a greater than 10% FPS cost is a good place to start. Out of these we can instantly dismiss Scaled Resolution. This is pretty much an in-game version of Dynamic Super Resolution (DSR) running Gears of War 4 at a higher resolution and downsampling it to your native resolution. This is of course going to be extremely visually demanding and should be set to 100% for optimum performance.

Most Demanding Graphics Options in Gears of War 4

Ambient Occlusion is generally one of the more noticeable visual flourishes that can be added to a game. At its core this adds realistic shadows at the point two objects meet. This grounds the objects in the game world and make them feel as if they belong. I'd say it should be quite a high priority to enable Ambient Occlusion in Gears of War 4, although it may be wise to stay away from the Ultra setting and opt for High instead.

Depth of Field is the third most demanding graphics option in Gears of War 4, although this is a little misleading. Normally DoF isn't very demanding at all, and in GoW4 it isn't either. At least until you crank it up to the Insane setting. You can strip the 37% frame rate cost down to just 4-5% if you just opt for Ultra instead. As an effect it's not to everyone's tastes either, blurring objects which aren't in focus in order to mimic human vision.

And so we come to the most expensive graphics option in Gears of War 4 aside from resolution scaling. Screen Space Reflections is a snazzy way of saying this effect allows for real time reflections on surfaces such as mirrors, glass and water etc. It's a nice effect to have but I'd suggest it's not hugely vital in this particular instance. Objects rendered separate to the environment such as debris aren't reflected anyway, so seeing some of a game world reflected but not all of it can lead to the game feeling less lifelike. It sounds counter-intuitive I know, but this is an effect that should at the very least be dialed down to High to achieve single digit performance drops. Crank this up to Insane and you're sacrificing half the frame rate.

And lastly we come to Shadow Quality. I would argue this is the most demanding graphics setting in Gears of War 4 as if offers a fairly chunky performance drop across the board. Even going from Low to Medium represents an 11.5% loss in frame rates. Visually however it has a really nice and noticeable impact, so this one above all others is one you want to try and get as high as possible. With Shadow Quality up to the max shadows look clearly defined and add a fantastic degree of environmental detail. The gains are quite small as you head from Low to Medium and from Medium to High, but Ultra really does step things up a notch.

And that's that. A reminder that you can check out the official Gears of War 4 system requirements over on the game page to see what sort of gaming PC you'll need to run it. Not to long to go until it arrives either - Gears of War 4 is launching on October 11th for PC and Xbox One.

Whoa really great breakdown. You should do it often. Next is mafia 3.

WHat's there to break down atm? "reduce this option to get 30fps or increase it and still get 30fps"? xD 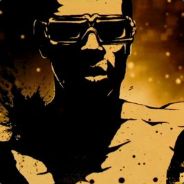 Even on the low settings it looks awesome

I wonder if my PC can run this on ultra? Otherwise, low with more fps is the way to go.

Look, as long as I can play the game ultra or not, I'll enjoy it.

Of course you could.

I barely see any difference between low and ultra. there is some but minimal at best.

These days low just doesn't feel low at all.

OK so I understand now that it isn't of all the settings at once but only one.

Can we please get a slider for all at once?

this post is amazing, thank you for the info

Oh no! Someone gave their opinion! Let me not give a constructive argument why I apose it, instead, I'll just down-vote this person's comment :D

I'll give a constructive comment...
This can't be GOTY bvecause of the following:
1) Witcher 3 Blood & Wine was also released this year
2) This game is quite boring (last time I tried it it was mainly that "run to an area - cover - shoot until spawns stop - run to next area - cover - shoot till spawns stop - repeat" gameplay)
3) It's highly subjective and surely there are many better games that came out this year.

Wait, so your initial argument is because of a game that launched in 2015, released a DLC this year? Even so, it isn't convincing me why it automatically counts as GOTY. The Witcher 3 is a great game, but like every game it has it's flaws. For example the horrible combat system. But really, It depends how you look at it. Like you said it's subjective. Yeah, maybe Gears Of Wars 4's game-play mechanics isn't as innovating as it was back in 2006, but I do recall the game having a good story and coop, especially GOW2.

Just for clarification, I'm not arguing GOW4 is GOTY material. Just felt like arguing against your comment or sorta.

it's great but I wouldn't say goty, other great games came out.

Btw, i'm still playing through the witcher 3's storyline. But so much to do everywhere. probably will get blood and wine as well

Other Than Lightning, Difference is very less or unnoticeable..

The sliders show only ONE option changed!

But Still Quite Un NOtice ABle

Am i the only one who see no difference other than lightning? 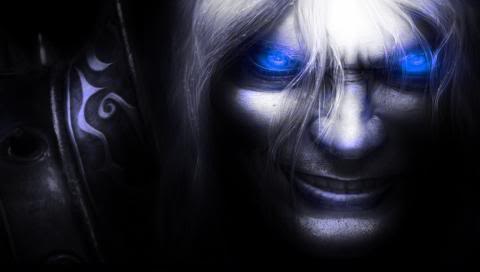 Reading can be hard sometimes....

Ooohhh.... Thanks to your comment I no longer have to make a comment about how it looks almost exactly the same and how we should all laugh at how pathetic the changes are. I don't read when there are pictures XD

"I don't read when there are pictures"
This is the unfortunate reality for most these days... very unfortunate...

i don't see any lightning in any of the screenshots,i'm assuming everyone means lighting? that would make more sense

Love all those peformance related articles!

Damn, that's great to know which to dial down, I presume it's pretty much same for every game?? Cheers:-)

To an extent, it does vary quite a bit though. Depth of Field usually costs nothing but it's heavily demanding in Gears 4!

low setting is not bad hmmm