In a frightening and yet unsurprising turn of events, Oculus has dropped support for Samsung’s Galaxy Note 7 on its mobile Gear VR platform. The reason, as I’m sure most of you can guess, is the exploding phone catastrophe which has beset Samsung’s new flagship. Imagine, for a second, the Gear VR equipped with a Samsung Galaxy Note 7, exploding just an inch or two away from your face.

If you now try to download the Gear VR app now from the store it prevents you from running it on the Galaxy Note 7.

“Customer safety is Oculus’ top priority,” reads the message. “Oculus is removing support for all Note7 devices on the Oculus platform. Until further notice, Note7 devices will not be compatible with the Gear VR. For more information regarding the Note7 please contact Samsung directly.”

So that was a disaster just waiting to happen, but at least now, almost two months after the Note 7’s launch, your eyes are safe. The problem itself stemmed from something as simple as the battery. A malfunction within causes an electrolyte to overheat to the point of explosion. 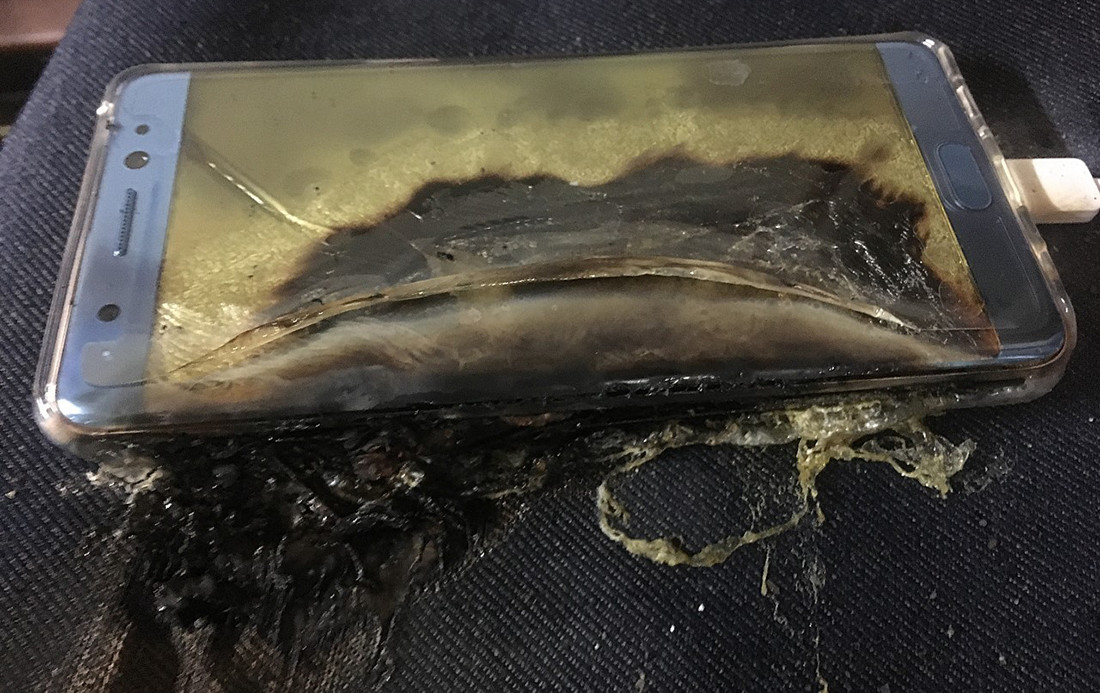 If you do happen to have a Samsung Galaxy Note 7 now then you are advised to power it down and return it immediately, and obviously don’t try and strap it to your eyeballs.

Production of the phone has now been permanently ceased and around 2.5 million phones recalled. The Note 7 had everything the Note needed to have. Specifically the phone has a premium metallic and curved design. It has a Quad HD Display and one which is bigger than it predecessors. Above all it was the first ever smartphone from Samsung to feature Iris Recognition and Scanning. And yet it failed because of a simple (and dangerous) battery issue.

The Note series stood out from the crowd, now they stand in a rubble. Samsung's reputation is in doubt and they have lost the customer confidence they once had. It’s expected the entire saga could cost Samsung billions of dollars. From a VR and gaming point of view this is undeniably an extremely dangerous device to sell to users to attach just inches from their eyeballs, and it certainly raises a few questions about the potential safety of VR in general. We are putting a lot of faith in manufacturer's hands when we willingly envelope our heads in hardware.

Has anyone here got an exploding Note 7 in their midst? Could this be potentially damaging to VR as a whole or is it just a one-off blip? Let us know what you think!

Cheers to Shaheryar as well for co-authoring and lending his smartphone knowledge to this article!

I'm pretty sure they didn't need to announce this, I'm sure everyone dropped support for this hand grenade the moment news about this bomb blew up lol:D

Could I just say that maybe this is a Simple Bobcat Goldthwait thing. They finally created a phone that, if you were to phone into American Idol, it would trigger the battery to explode, maiming the user's face. That way, you wouldn't have to associate with people who vote for American Idol, as they cannot improve the quality of your own life with anything that they can say. :3

Even iphone 7 is exploding i think

Wow I never even thought of this... that's actually terrifying O.O

It's a shame that samsung ceased producing the note 7, such a good phone :/.

Nah, They can still sell it. Just call it the Michael Bay Edition

A phone fit for Michael Bay...

Only if they have it strapped to one side of their face.

Adds to the experience of blowing things up in a game :P

"We are putting a lot of faith in manufacturer's hands when we willingly envelope our heads in hardware."

Hahahaha....hip hip hurray for the worst anime of the decade making a valid point...(Oh here comes the hate comments)

I'll respect people's opinions lol. But you can't honestly say it is the worst... There have been some pretty f***ing bad anime to come out this decade...

Note 7 as a VR device.. Dunno about you folks but that's a win-win situation.

Yeah... I can imagine an exploded face #BreakingBad lol

It's a shame, Note 7 is one of the best phones out there, if it just wouldn't have this battery problem :(

Samsung is doing everything to save people from the disaster . I just hope people don't try to put samsung in negative image durimg future release because of note 7's issues.

Also going to support Vulkan. or all upcoming phones will?

Can't even imagine what happens to your face and most important - your eyes when the phone blows up right before your eyes!!! Yaix!!!