A major update is rolling out for Rainbow Six Siege today, adding in a new map, buffing our lord Tachanka, and making some serious Operator and weapon balancing changes which could totally change the dynamic of high-end play.

Tachanka is the big winner here. He’s probably one of the Operators most in need of a buff over the last year, and usually the butt of all Siege jokes. Now though, the tables are turning. Tachanka’s heavy machine gun is being upgraded, adding in a huge frontal shield to prevent headshots. It’s going to have 500HP so it’ll take a battering, and it means Chank will be able to take command of his angle, rather than be easy prey for peekers. His mobility is still basically zero however, so he’s going to be particularly vulnerable from his flanks. 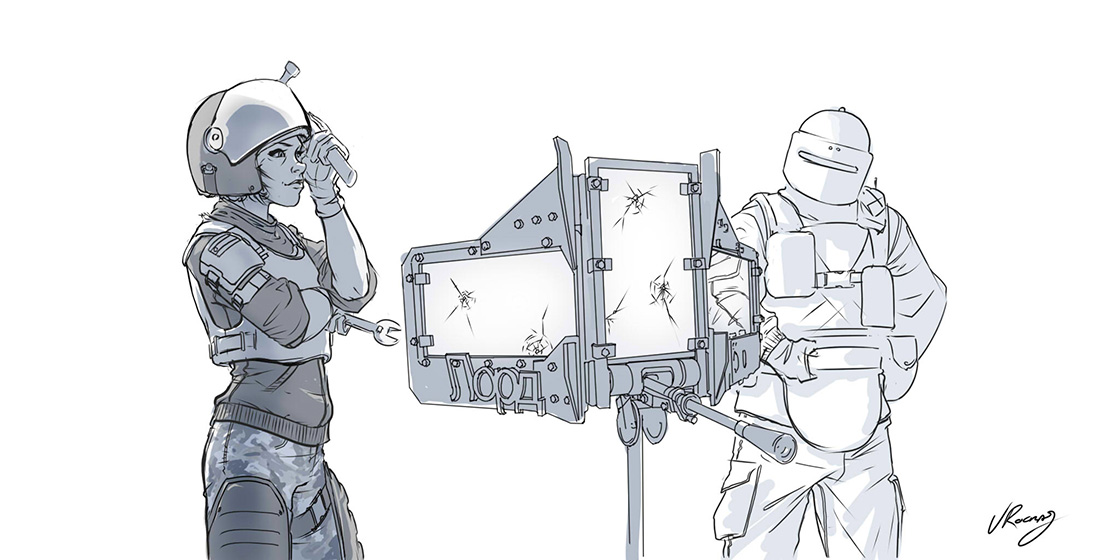 The other major addition is the Bartlett University map. If you play a lot of PvE or you completed Rainbow Six Siege’s Situations mode then you’ll have seen this map already. It’s absolutely huge, so Ubisoft has been spending time reworking it so it’ll work in a PvP environment. This includes better destruction, no gas, improved layout and two-tier destruction to better balance the map. I’ve only just got my head around Skyscraper so it’s cool to see a new map come along so swiftly. For newcomers however, Siege is becoming a more daunting proposition. A single Siege map is easily worth four or so in a Call of Duty type affair, thanks to shifting objective points and destructible environments.

And now onto the real nitty gritty - the balancing. The Mid Season Reinforcements adds another Cluster Charge for Fuze, bringing his total up to three. The blast zone of each individual pellet has been up from 2.5 meters to 4.2 meters, while the lethal range remains at anything under 1.2 meters. In theory thisc should make Fuze a stronger choice for flushing Defenders out of their hiding spots, and is also basically a bump up in the effectiveness of Jager, whose ADS devices can destroy the pellets.

Bandit meanwhile is getting a fourth electric battery in an effort to counter the dual forces of Thermite and Hibana, while Smoke’s Gas Canisters will now fly like normal Frag Grenade’s rather than the limp throw he currently has.

Glaz’s changes are buried deep in the patch notes but they’re actually pretty fundamental. His OTS-03 rifle is getting a massive buff. His rate of fire is doubling from 110 to 220, while first show recoil is decreasing 60-68% and centring time is reduced by 50-60%. That’s a huge change in the right hands, making Glaz a more valid choice when indoors.

You can’t have buffs without debuffs however, and Blackbeard is once again getting battered down. Not only have his shields’ hit points been further reduce down to 60 HP from 150, but his ADS time has jumped from 0.25s to 0.7s, and up to 0.8s while sprinting. He’s still one of the most picked Operators right now, but I can’t help thinking this nerf makes him practically useless. Still got a fine beard though.

The last major change is to SMGs. The recoil is being reduced to make them more effective against assault rifles. Assaults have high damage and high recoil, while SMGs have low damage and low recoil. Ubisoft hopes this makes SMGs a more tempting choice for Defenders.

You can read the full patch notes here, ahead of the update going live at roughly 11am EST / 4pm GMT.

What do you make of the changes? How is this going to affect the meta? Can Lord Chank become a must pick? Let us know!

I knew it... I knew it... I should have patented the idea... the moment I saw tachanka's stationary LMG, I knew it needed a shield... god damn it, god damn it... but this will work even better with my tactic of putting a deployable shield infront of the LMG and now with this upper shield, can't touch me...
Though you can still blow me, if you dare.

(In all seriousness tho I'm loving the patch notes. Can't wait to play the game today.)

this is a great update making everyone useful so big thanks to developers!

I'm worried that,if the side panels of the shield stick out too much,attackers could be able to destroy Chanka's shield while he's unable to even see them.

It's a game all about placement and strategy. If that situation arises, then it's Tachanka's fault.

I think they destroyed blackbeard. 60hp on a shield is nothing. About the Lord, I don't know. Was hoping for something more creative but i guess there's no other way to counter peeker's advantage. Thumbs up for the patch overall

I absolutely suck with him but I seem to always be killed by him. I don't use him all that much so glad to see him nerfed!

I dont even have him unlocked. I am a really new player in the game. But he has destroyed me and my friends many a times as well :P

Hah, were you about when he originally arrived? He had a single shield with 800HP. Then in September this was changed to 2 with 150HP each. Now it's two with 60HP lol. At first he was literally bulletproof in windows.

Yeah Louk you read that right. I remember when I was defending,he pops up on the window,I literally empty my mag from MP5 straight in his shield,he turns around and shoots me in the face. It was ridiculous

while the first version of blackbeard was OP, the current one was fine. the shield protected you but no longer allowed you to straight up camp the windows and laugh at the mortals inside. i'm afraid his unique gadget will no longer have a purpose and he'll basically become a recruit with weapon sights

Now the shield should only protect him from 1 or 2, so it's not bloody ridiculous.