Ubisoft kicked off the For Honor closed beta about two hours ago, letting thousands of players across PC, PlayStation 4 and Xbox One head in and start chopping each other up into little bits, all in the name of fun. We've been getting stuck into a bit of 'Simon Says' hacking and slashing and found it a bit of a laugh, albeit erring on the basic side. We'll have all sorts of benchmark goodies for you in the coming days but first of all here are all the display and graphics settings you can tweak in For Honor in order to achieve tip-top performance and a silky smooth frame rate.

For point of reference for these settings be sure to check out the official For Honor system requirements first to see just how your hardware stacks up.

All the usual suspects here and pretty self-explanatory. For whatever reason the For Honor Closed Beta doesn't let you change the resolution within the game or even switch between full screen windowed / full screen. I tried altering the resolution through the .ini file but For Honor still appeared to be rendering at 1080p regardless, even if said it was 1280 x 720 in the options. Trying to drop the resolution this way also did not boost performance. 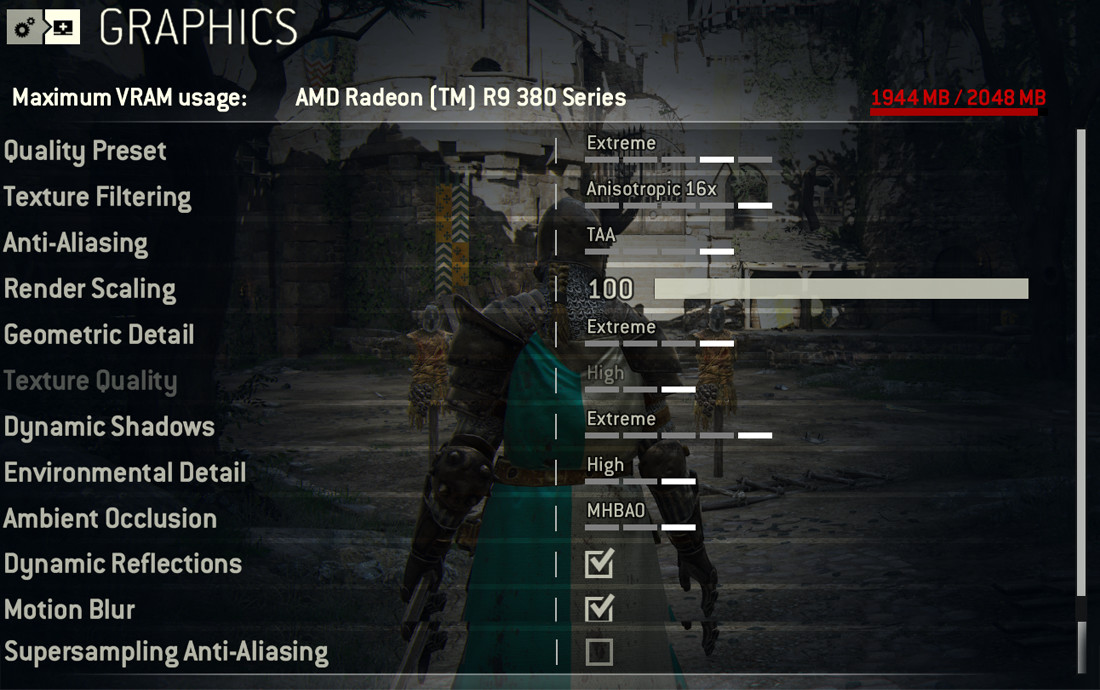 In total there are four graphics presets in For Honor, comprising Low, Medium, High and Extreme.

The only graphics settings which aren't affected by the graphics presets are Motion Blur and Supersampling Anti-aliasing (SSAA).

Motion Blur is totally optional and has a negligible effect on frame rate.

SSAA is incredibly demand however and isn't enabled in For Honor even when playing at the Extreme preset. On the Radeon R9 380 it absolutely tanks the frame rate, dropping from 48 at 1080p / Extreme to just 8 frames per second with SSAA enabled. Give this option a wide berth unless you've got some serious GPU firepower. Check out the image below to see just how demanding SSAA is on your VRAM, using up over 1.7GB alone. 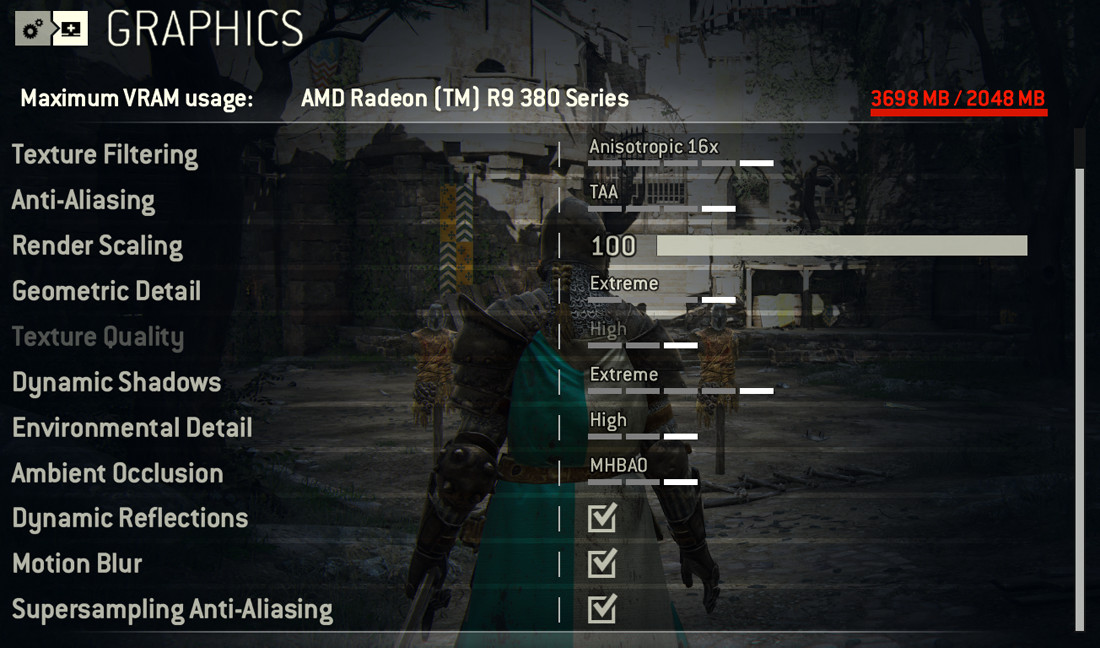 That's all for now but keep your eyes out later for For Honor benchmarks, low vs ultra graphics comparison sliders and our PC performance breakdown.

I have 560ti can I run this game on low settings?

I played it for like an hour or less last night, Just not my cuppa tea... Will be a game that gets boring VERY quickly for me.

Graphics wise, Every preset turned on ..... Runs Flawlessly, as you would expect with my set up.. Even in 2K...It is very well optimised.

Played it for a couple hours today,extremely well optimized I can say.Funny thing,when I first launched the game,uplay displayed a message saying that i don't meet the minimum reqs,even though my rig is well on par with the recommended reqs.Playing it on extreme with a few things off(playing with fxaa,high shadows and SSAA off) stable at 55-60 fps with only very small drops in heavily populated areas(like 20-30 npc's at a time on the screen).

Contrary to popular opinion, 2gb cards still rock a lot of current AAA games :)
And when they dont, it aint because of the 2gb vram

I am playing it right now and HOLLY HELL is it optimized....works like charm on my rig 95 fps average on extreme lol

That is pretty good to hear! I'm downloading it right now and later today I will run it and see how things go.